It’s almost time for Mardi Gras to roll into Vicksburg 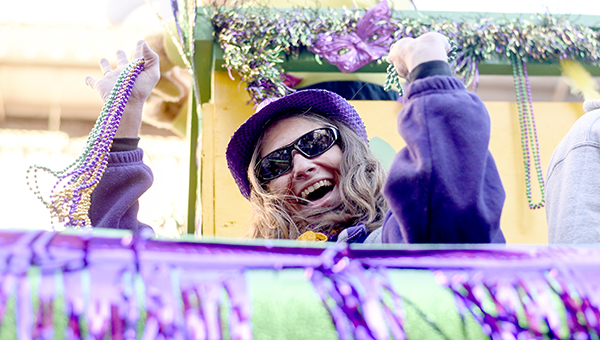 Beads are thrown from a float during the 2017 Mardi Gras Parade in downtown Vicksburg. The 2022 parade is in need of Krewes. (Courtland Wells/Vicksburg Post)

As float participants toss the necklaces out to the crowd, parade revelers hold out their hands in hopes of garnering a few.

And she should know. For the past 18 years, the Vicksburg Main Street Program has sponsored the city’s annual Mardi Gras parade. This year’s parade is set to roll down Washington Street on Feb. 22 beginning at 4 p.m.

Hopkins said there have been many who have participated in the parade, some of which include Krewe of Bloom, Hearn Trucking, Sheffield Krewe, Hinds High steppers, WES Castle Club, the Corps of Engineers, Krewe DeLaburg, Pete’s V dubs and the Vicksburg Library.

For those interested in participating in the 19th annual event, the deadline to enter is Jan. 26 at 4 p.m.

Entry fees are $25 for non-profit groups and $50 for businesses.

The entry fee moves to $50 for non-profit groups and $100 for businesses who want to enter the parade after the Jan. 26 deadline.

Hopkins said trophies are awarded to float units in the categories of best non-profit, best business, most original, most enthusiastic, best in show and best throw. Judging will take place along the parade route and winners will be announced following the parade.

For each of the parades, a Grand Marshall has been chosen, Hopkins said, to serve as the leader of the event.

Chosen by the Main Street board of directors, this year’s grand marshal has not yet been selected.

Billy Sheffield, Alice Hebler, Linda Fondren, Pat Hemphill, Christi Kilroy and Jay Hopson are among those who have been named the parade’s grand marshal.

“We look at community leaders, volunteers and someone who has had a positive impact on Vicksburg,” she said.

With nearly 3,000 people attending, Hopkins said, her favorite part of the parade is seeing the excitement from the crowd.

“It is so much fun seeing everybody smiling and laughing and having a good time,” she said.

For information on how to enter the parade, call 601-634-4527, visit downtownvicksburg.org or email kimh@vicksburg.org.