Keep gun safety in mind when taking your hunting photos 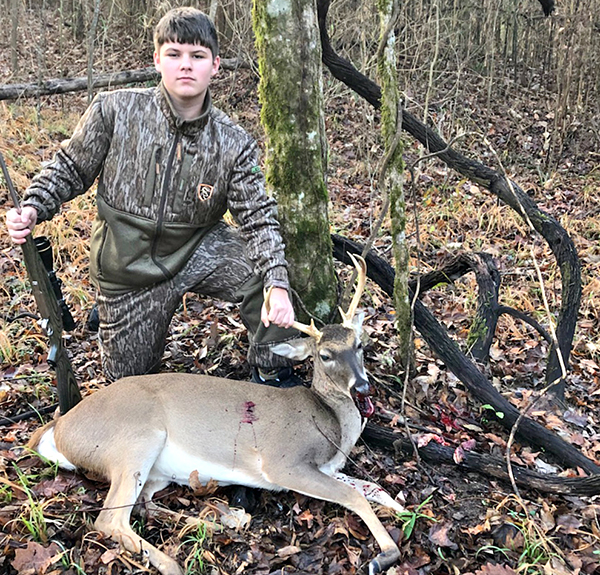 Blake Keen, 12, of Vicksburg, killed his first buck while hunting on private property on Dec. 24. The buck was a 6-pointer. Blake is the son of John Keen and Mindy Morris. • The Vicksburg Post invites hunters to submit their photos. Please email them to sports@vicksburgpost.com and include the name of the hunter, the date and location of the hunt, the size of the animal, and contact information. Photos with an excess of blood and gore will not be published.

So far this winter, The Vicksburg Post has received and published more than a dozen photos of deer that have been bagged by local hunters. It’s a longstanding tradition that goes back decades, and one we hope to continue for years to come. You can email them to us at sports@vicksburgpost.com.

Over the years we’ve become accustomed to some gripes from readers regarding the photos, some of which are understandable.

Some take offense to the glorification of killing animals, even if hunting is a necessary and effective way to control overpopulation. Others bristle at the gore, and we try to keep that in mind. We will not publish hunting photos that look like publicity shots for a horror movie.
Last week, we got a new complaint that there might not be an easy solution for but still made us stop and think.

A reader pointed out that in several recent photos, the hunters were posed in such a way that their rifles were pointed toward them. In each case, the rifle was propped up on the back of the deer. In at least one instance, there appears to be a magazine still loaded in the rifle.

The weapons, hopefully, had the safety on or were not loaded when the picture was taken. Even if that was the case, however, their positioning does violate one of the most basic tenets of gun safety — never point a weapon at anything you don’t intend to shoot.

Guns do not shoot themselves, but accidental discharges do happen. In December 2018, a duck hunter near Eagle Lake was seriously wounded when a dog jumped into the bed of his truck and stepped on the trigger of his shotgun. It’s not hard to imagine a similar accident caused by an unsteady rifle being nudged off the back of a deer, turning what should be a happy moment into a tragic one.

Another fundamental rule of gun safety is to always treat one as if it was loaded. Even if you think the safety is on and the magazine is empty, always assume there is a round in the chamber. Those two rules complement each other and prevent many accidents if practiced in tandem.

The reader who pointed out the position of the weapons asked us to be mindful of publishing pictures like this. I’m not sure what we can do on that front. It’s hard to crop the weapons out of photos, and we can’t go back and re-pose the photo.

What we can do is ask you to be vigilant when you take the picture. Make sure any guns are unloaded and pointed away from people. We want to make sure we’re running a happy photo on the sports page, and not a horrific story in the news section.