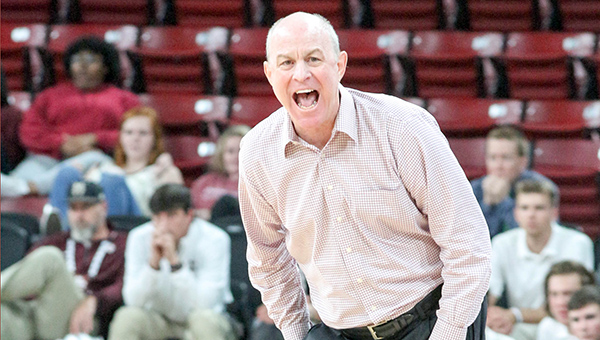 Mississippi State men’s basketball coach Ben Howland was fined $25,000 by the Southeastern Conference on Friday for discussing conversations with conference officials with the media. (Walter Frazier/For The Vicksburg Post)

BIRMINGHAM, Ala. (AP) — Mississippi State coach Ben Howland has received a $25,000 fine and a reprimand from the Southeastern Conference for discussing a conversation he had with the league office about the officiating in a loss to LSU last week.

SEC officials said Howland violated a league bylaw that prohibits coaches, players and support personnel from offering public criticism of officials or for making public any specific communication with the league office related to officiating.

Howland said during a Monday news conference that he spoke with SEC coordinator of men’s basketball officials Mark Whitehead about “a number of calls” that were made in Saturday’s Mississippi State-LSU game. Howland said Whitehead acknowledged that a foul should have been assessed against LSU on one particular play in which no foul was called.

LSU edged Mississippi State 60-59 when Skylar Mays hit a jumper from just inside the 3-point arc at the buzzer.

SEC officials said future violations of the league’s code of ethics may result in additional penalties, including a game suspension.

Fines levied against schools and individuals in the SEC are directed to a fund supporting the league’s postgraduate scholarship program.

Mississippi State picked up its first SEC win by routing Missouri 72-45 on Tuesday.

This is the second of three consecutive home games for the Bulldogs. They’ll host Arkansas on Jan. 22, and then five of the next seven games are on the road. Two of the first three SEC games were also on the road.

“We’re really not too worried about where we’re playing at,” said Mississippi State forward Reggie Perry, who is the team’s leading scorer at 16.0 points per game. “We want to win games on the road, and we want to win games at home. Of course, it feels good to play at home in our own gym with balls that we’re used to and rims that we’re used to in front of some good fans.”

Georgia is also coming off a double-digit victory, having won 80-63 at home against Tennessee after losses to No. 10 Kentucky and No. 4 Auburn to open SEC play.

The Georgia Bulldogs have won five of their last seven games overall. They are 9-1 at home, but 2-4 this season in road and neutral site games.

Mississippi State has won the last two games in the series, including a bizarre 68-67 victory in Athens last season. MSU’s Quinndary Weatherspoon was fouled on a game-winning shot attempt with five-tenths of a second left. He missed the first of two free throws, but Georgia was assessed a technical foul when a fan threw a stuffed animal onto the court. Weatherspoon hit one of two ensuing free throws for the win.