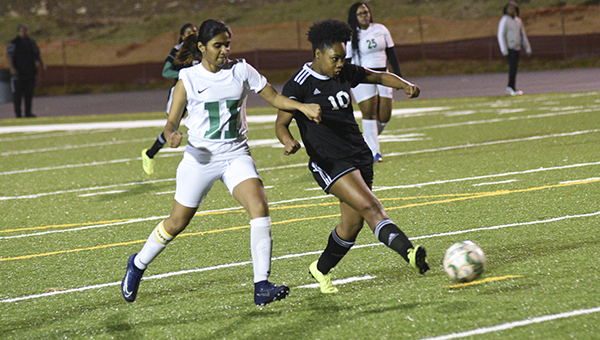 Haleigh Erwin took some ribbing from her father, teammates, coaches and even a referee after she missed an easy shot on a wide open net. Fortunately, she had plenty of chances to redeem herself, and earned the right to have even more opportunities down the line.

Erwin scored three goals as Vicksburg High routed Jim Hill 7-0 Friday night to clinch the MHSAA Region 4-5A championship. It’s the team’s first region title since 2015, and guarantees a home game in the first round of the Class 5A playoffs that begin Jan. 28.

“It feels so good, because we haven’t won the district championship since my seventh- or eighth-grade year,” said Erwin, one of only two seniors on Vicksburg’s roster. “It’s good to bring it in with all of the freshmen, juniors and sophomores, and it’s a big boost of confidence for us because last year and the year before we didn’t have a connection. Now, from summer practices to now and to go to the playoffs, I love it.”

The Missy Gators (11-2, 6-0 Region 4-5A) have run roughshod over their region opponents. Friday’s win marked the fourth time in six region games that they won via the mercy rule that ends the game if one team is ahead by seven goals or more after the 50th minute. Another game was a forfeit.

“The older girls have stepped up to embrace everybody as family. You can tell when they’re a little nervous, they try to talk to them. The team chemistry was the most important thing for us, the meshing and gelling,” Williams said.

The outcome of Friday’s game was never in doubt, even with a few missteps by the Missy Gators in the first half.

Erwin scored her first goal 90 seconds into the game and McKenna Elder made it 2-0 with a breakaway goal in the 14th minute.

Vicksburg outshot Jim Hill 20-1 in the first half. The only downside were several offside calls that negated breakaway chances, and some misfires on chances that were onside.

Midway through the first half, Erwin beat the keeper at the top of the box and had an uncontested shot that she pushed wide of the net despite settling the ball and setting it up. It was a miscue that led to plenty of good-natured questions at the halftime break.

“I made a good move and I got too happy. The goal was right there in front of me and it was my mistake,” Erwin said. “But I made up for it with my other goal and the last one I made.”

Luckily for the Missy Gators, the missed opportunities did not hurt them in the least. Erwin scored her second goal in the 27th minute, and Trinity McGloster got one in the 38th to push the lead to 4-0 at halftime.

Early the second half, an own goal and a goal off a free kick by McGloster made it 6-0. Erwin ended it in the 54th minute with a breakaway goal that completed her hat trick and allowed the Missy Gators to celebrate their first region championship in five years.

“This is awesome. They haven’t been undefeated in district in years, and then this is the first district title since 2015, so I’m hoping we can get past the first round and keep building,” Williams said. “It’s a young team. We only have two seniors and two juniors, and everybody else is freshmen and junior high. So I am ecstatic.”

Jim Hill (7-6, 4-0) clinched a playoff berth with the victory and is tied for first place in the region with Callaway.