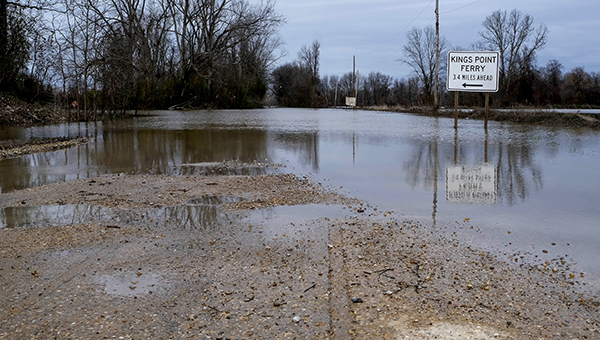 Heavy rains over the mid and upper Arkansas River Basin were responsible for the rapid rise in the Mississippi River that put it past flood stage at Vicksburg, a hydrologist for the National Weather Service said Friday.

“The rise (in the river) started on the morning of the 12th,” he said. “Most of the middle basin is what did that, and then it just kept it up as the other water came in later and kept it up from the 12th to evening of the 15th.

“It kept the (Arkansas) river up for three days, and then it moved (into the Mississippi).”

Pope said forecasts indicate the Mississippi at Vicksburg will remain at flood stage through the first week of February.

“Without the (previous) two-day rainfall, it would have gone back from flood stage around the 31st,” he said.

When the Mississippi starts exceeding 36 feet, several areas in the northwest part of the city begin to flood.

Fire Chief Craig Danczyk said the workers were in a boat checking on water wells in the area when the boat capsized. The men were unable to right the boat and sought refuge on a nearby pump until they were rescued by firefighters.

Closing the Steele Bayou gates causes water to be held in the backwater area.

The Yazoo Backwater Area, Pope said, is forecast to reach 91.5 to 92 feet.

“The Wednesday rain put 3-to-4 inches in the backwater area,” he said.

According to the Corps, Vicksburg District workers and officials with other agencies will monitor the condition of all federal flood control works, including levees, floodwalls and pumping stations.

“The district will continue monitoring the forecast and the condition of its flood control works to determine if further activation of its emergency response efforts will be required. As of Jan. 17, the district has observed no significant sand boils or seepage at flood control sites,” according to a press release from the Corps.