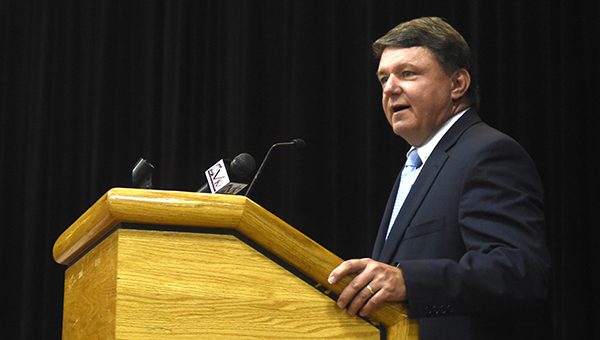 A series of criminal reform bills passed in the last seven years by the Mississippi Legislature have made it hard for prosecutors to do their jobs, 9th Circuit District Attorney Ricky Smith said.

“The Legislature is saying, ‘We need to get people out of prison faster, need to reduce prison costs,’ and they’re doing that by decriminalizing crime, not providing necessary methods to help keep them out of jail,” Smith told members of the Port City Kiwanis Club Thursday.

He said a lot of the changes are the result of recommendations from the state’s Corrections/Criminal Justice Task Force formed in 2013 to look at Mississippi’s criminal justice system.

“Everybody bought into that — non-violent offenders should not go to prison,” he said. “Now the focus is on taking away our ability to prosecute provisional criminals. The result is now we have people who have made careers out of committing felonies in our community — third offense, fourth offense.

Among the changes coming out of the task force recommendations, he said, were laws that reduced penalties for possession of less than 2 grams (0.07 ounces) of certain drugs.

Before 2014, Smith said any sale of heroin, methamphetamine, cocaine, or other drugs carried a maximum 30-year jail sentence.

“That was quite a significant penalty for selling those things in our community,” he said. “Now, for selling less than 2 grams of cocaine, methamphetamine, heroin, the maximum penalty reduced to eight years.

“Stacked on top of that, is the fact that anybody who goes into the Mississippi Department of Corrections for a non-violent offense faces release after serving 25 percent of their sentence. So now that 30-year sentence is now a two-year sentence for sale of a lower level controlled substance.”

The Legislature also changed the laws on property crime.

Before 2014, Smith said, if somebody came into a yard and stole a riding lawn mower valued $500, “They were facing some prison time.”

The Legislature in 2014 raised the felony threshold to $1,000 and dropped the penalty, he said, adding a crime that at one time carried a 10-year penalty now means time in the Warren County Jail.

Most of the reason for the reforms, he said, is to reduce the cost of operating the Mississippi Department of Corrections.

He said the state’s prosecutors were told by state officials the money saved by reforms would be reinvested to reduce recidivism and help may inmates become better citizens when they were released.

“What people don’t know is beginning in 2013 and even today more people are going to prison on revocations than on original sentences,” Smith said. “That means we’re not treating the non-violent first-time offender in prison like everybody thinks we are.

“The prisons aren’t full of first time non-violent offenders; they’re full of people who have been given opportunities and not taken those opportunities.

“The majority of people who come out of prison have no idea how to get a job, so even simple things like that are not available,” he said.

Smith said more criminal justice reform bills have been filed for the present session, adding, “I understand money is the main reason, but they need to hold off on more bills until they have time to see what effect the ones they have passed have on the state.”