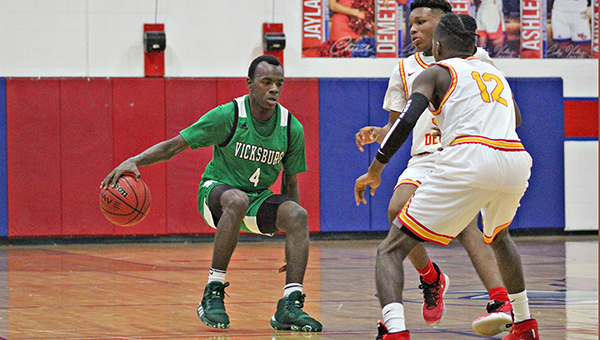 Saturday’s game with South Delta was Vicksburg High’s second in about 17 hours, so it would have been understandable if they came in with tired legs.

If they did, they didn’t show it.

Taylon Smith drained seven 3-pointers — three of them in the third quarter — and finished with 23 points as the Gators beat South Delta 77-65 in the King Dream Weekend Basketball Showcase at Warren Central.

“If they don’t make an adjustment, that guy is going to shoot the cover off of it. He works on his craft so hard,” Vicksburg coach Kelvin Carter said of Smith, who is shooting 61 percent from 3-point range this season and scored in double figures for the ninth consecutive game.

The game, which was originally scheduled for the canceled Red Carpet Basketball Classic, was the middle act of a busy weekend for the Gators. They lost 58-49 to Region 4-5A rival Callaway on Friday night, had a quick turnaround for a noon start on Saturday, and will play again Monday afternoon at 3:30 p.m. against Murrah in the MLK Classic in Jackson.

On Tuesday night, the Gators go back to Jackson again for another region game against Provine.

“It was very tough coming back off of Callaway. Even though (Daeshun) Ruffin didn’t play, they rolled to a whole other level. We’re back to the drawing board and we continue to work,” Carter said.

The Gators (12-7) started a little slow against South Delta (12-7), but still were able to creep out to a 38-30 lead at halftime. Then Smith got hot in the third quarter and they blew the game open.

Smith made three 3-pointers, all from the left corner, while Sean Hardy and Cameron Butler each made one. Fifteen of Vicksburg’s 23 points in the third quarter came from beyond the arc. Butler’s trey with 36.6 seconds left capped a 17-4 surge that put the Gators ahead 61-42.

“We made some adjustments. They were in a 1-2-2 and we were trying to get somebody in the middle to attack a little bit more and suck the defense in. They never made adjustments on the shooter, really. We were trading buckets for a while, and once we figured out how to stop them we made our shots and pulled off a little bit,” Carter said.

The lead grew to as many as 20 points midway through the fourth quarter before South Delta made it a little more respectable in the final minutes.

“I’m still not pleased with how we finished the game,” Carter said. “You have to build toward the next game. You have to build on the lead instead of giving the lead up. Those are things we’re definitely going to work on.”

Girls
Vicksburg 50, Callaway 41 (Friday)
Yakia Burns finished with 15 points, and the Vicksburg Missy Gators shot 47 percent (21-for-45) from the field in earning a key region victory over Callaway on Friday.

Vicksburg reached the halfway point of its region schedule in second place, one game behind first-place Provine and one ahead of both Callaway and Ridgeland. It plays Provine twice in the next 10 days, Tuesday in Jackson and Jan. 31 at home. One more win or a loss by Callaway would ensure the Missy Gators finish with no worse than the No. 3 seed in the region tournament next month.