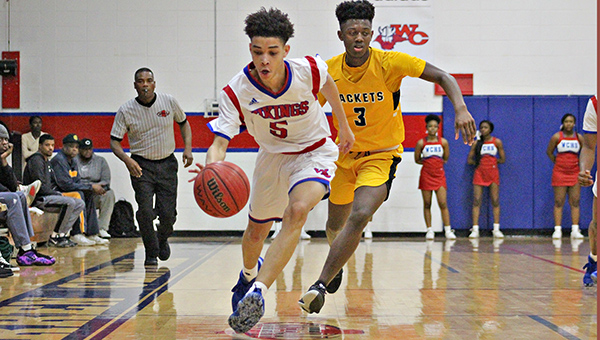 Warren Central overcame a slow start on Saturday. It couldn’t overcome a slow finish, too.

The Vikings erased most of a 21-point deficit by the third quarter, but only scored four points in the last five minutes of the game and lost 55-46 to Starkville in the King Dream Weekend Basketball Showcase at Warren Central.

Starkville hit 10 3-pointers in the game, all but one of them by either Eric Green or Coltie Young. Green made five 3-pointers and scored all 17 of his points in the first half. Young drained four treys, including two during a pivotal run late in the third quarter, and finished with 16 points.

“We didn’t guard the 3-point line. We gave up those 3s and that stretched the lead out. And I think we took too many quick shots. We’re still here in January trying to determine who we are,” Warren Central coach Bruce Robinson said. “I know who we are, but it does me no good until the kids realize who we are. We’re an inside-out team. When we started going inside and getting two feet in front of the rim and into the lane, we cut into the lead. We’re not going to shoot that ball like Starkville, but we can defend and stay in ballgames like we did today.”

Green made three of his 3-pointers in the first quarter, when Starkville jumped out to a 19-4 lead. The Yellow Jackets (12-2) were up by as many as 21 points in the second quarter, but Warren Central slowly chipped away at its deficit.

The Vikings got it down to 11 by halftime, and to five midway through the third quarter before Starkville stepped on the gas again.

A three-point play by Trey Jackson and two 3-pointers by Young keyed an 11-2 run that pushed Starkville’s lead to 49-37 by the end of the quarter.

Warren Central was within nine with five minutes left in the game, but went cold. Two tip-in baskets by Bowman, both off of offensive rebounds, were the team’s only points in the final stretch. Starkville only scored six points in the fourth quarter, but the scoring drought by the Vikings allowed it to hold on for its fifth consecutive victory.

“I was very pleased with our effort,” Robinson said. “We came out and dug ourself a hole and we dug out of the hole. We played with passion, we played with energy. We defended well just to get back in the game. So I was pleased with that.”

The Lady Vikes missed their first six shots of the second quarter to allow Starkville to pull away, and then only scored 18 points over the last three periods combined and lost their fifth game in a row.

Amaya Ford scored a game-high 21 points for Starkville (6-7), while Tydaija Spencer and Sukkima Suell finished with eight apiece. Ford and Spencer combined for 14 of Starkville’s 20 points in the second quarter, when it entered the period tied and left with a 31-17 lead.

Aniya Sanders led Warren Central (8-9) with nine points — all in the first half — and Ashlea Raney scored eight. The Lady Vikes have two freshmen and two sophomores in the starting lineup, and coach Darein Hilliard said inexperience has contributed to the team’s recent slump.

“We’ve been hitting those droughts. Once the adrenaline stops and the actual game starts, I just don’t think we’re mature enough right now to be able to withstand that adversity,” Hilliard said.