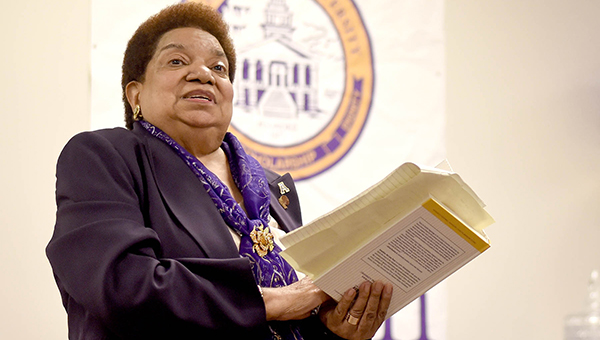 LORMAN — The triumphant life of alumnus and former Alcorn State administrator Dr. Josephine McCann Posey will be celebrated next weekend in Vicksburg.

An accomplished educator, Posey served as Alcorn State’s historian for over 30 years, chronicling the institution’s challenges, contributions and successes in three books.

She worked in the Yazoo, Covington, and Washington County public school systems and became the first female to serve as the dean of Alcorn’s School of Education and Psychology. Posey was appointed interim vice president for Academic Affairs and spent time as the special assistant to the president, professor and department chairperson at Alcorn.

Back in 1970, when Posey began her education at Alcorn, she befriended Vicksburg native Jo Ella Walls, who also graduated in 1970. Walls spoke about the friendship she and Posey shared. She remembers Posey for her genuine personality and humbleness.

“I’ve never had a relationship like the one I had with Josephine,” Walls said. “It’s like we were meant to be friends. She was very down to earth and unique. She never let her degrees change her personality. Hearing of her passing is heartbreaking, and I’m still trying to gather myself after hearing the news.”

Another bond Posey formed on her journey was with LLJuna Weir, director of Educational Equity and Inclusion and Title IX coordinator at Alcorn. Weir credits Posey for setting a positive example for her to follow in her professional career and personal life.

“Dr. Posey was not only a colleague, but she was also my mentor,” said Weir. “We’ve collaborated closely on many projects, and I will forever share her knowledge of the history of Alcorn State University and our Alpha Kappa Sorority, Incorporated.”