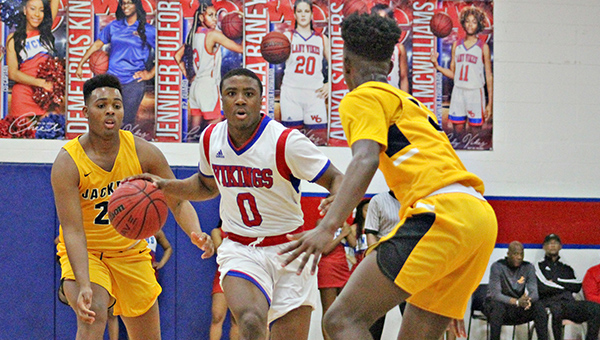 Most of the time, the season-ending stretch that sits in front of Warren Central would be a golden opportunity to shake off a slump and gain some momentum heading into the postseason.

The Vikings play five of their last six games at home, including three against Region 4-6A opponents. Despite a 0-2 record in the region, it’s a golden opportunity to make up some ground.

Then coach Bruce Robinson took a quick look around, as his team packed up its belongings following a 55-46 loss to Starkville on Saturday, and had second thoughts.

Warren Central is only 2-5 at home this season. Ongoing construction at the school has turned the school’s gym into a primary corridor that students and teachers alike use to reach other parts of the building. The locker room has been gutted and sealed off. The team dresses in a classroom before games and practices.

Although it’s an accepted part of building toward the future, Robinson said it’s causing plenty of problems in the present and stealing some of the home court advantage the Vikings desperately need right now.

“When it’s all said and done, I can’t use any of that as excuses. We just have to get the job done,” Robinson added.

Saturday’s loss to Starkville was Warren Central’s first home game of 2020. It started the year with road losses against region opponents Clinton and Murrah.

Those teams are about to return the trips, however. Murrah visits Tuesday and Clinton on Jan. 28. In between, Madison Central comes to town on Friday night.

Warren Central (10-9, 0-2 Region 4-6A) is currently tied for last place in the region with Madison Central (12-9,0-2). Murrah and Clinton are tied for first, both at 2-0.
Robinson was hopeful the home games on the back end of the schedule would help his team get back on track.

“We hadn’t played any district games at home. Murrah and Clinton did what they had to do, they won their home district games. We’ve got Murrah coming over here, and we have to win our district games,” Robinson said.

Robinson said he also felt the teams in Region 4-6A are, by and large, evenly matched. Warren Central, Madison Central and Murrah’s (11-7) overall records are separated by only two wins. Clinton has fared better, at 16-5.

Three of the four teams will advance from the region tournament to the MHSAA Class 6A state tournament. Which one is left out will be determined by who plays well for two days in February, but Robinson said the next 10 days are important to make sure his team has a chance to do that.

“It doesn’t really matter, because you’ve got Madison, Clinton, Murrah and Warren Central. I would hate to play a fourth-place Warren Central team,” Robinson said. “That’s all that matters, is that particular game to get to the championship. If we can get the rest of them, 4-2 isn’t bad coming out of it. But nothing is going to be easy. We’re trying to keep our kids encouraged and let them understand that us coaches have been here before and still gotten deep into the playoffs.”

Warren Central’s girls’ team might have more work to do to prepare for the region tournament. The Lady Vikes have lost five in a row, and seven of their last eight, following Saturday’s 52-29 defeat to Starkville. They haven’t scored more than 37 points in their last four games.

Coach Darein Hilliard said a combination of youth and a difficult schedule have contributed to the struggles. Senior Aniya Sanders is an all-state talent, but two freshmen and two sophomores are rounding out the current starting lineup.

“We’ve not been able to play well against the good ballclubs. I’m having a hard time figuring it out. We just have not met the challenge when we face the traditional powers in 6A,” Hilliard said. “It looks like we’re just too young as we go off into our bench. We’re starting two freshmen and two sophomores, so I just think we’re not mature enough physically or mentally to handle what’s being thrown upon us.”

Hilliard noted that the upcoming region tournament is what will determine how this year’s team is remembered, but he isn’t throwing all his eggs into that basket. There are still five games left in the regular season, which represents five opportunities to improve and shake out of a slump.

“The bottom line is, it’s going to come down to one game. You get the right matchup in that game and you’ve got a shot. But we have to get everybody playing on the same platform. Right now we’re just not gelling together like we need to,” Hilliard said. “To me, it’s one game at a time.”