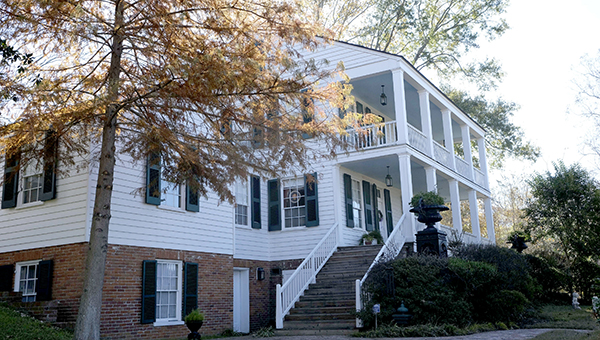 As the Civil War raged on, John and Mary Harwood picked up and left their home.

With its proximity to the Mississippi River, it had become an artillery battery for the Confederate soldiers.

McMillin, who along with her husband, the late Dr. Lamar McMillin, bought the home in 1975.

Located on Fort Hill, the home was originally built around 1825 as a simple saltbox house facing the river.

“The back two rooms of the house appear to be of earlier construction than the front two rooms,” Carol said, adding, the house was probably a “frontier-type” structure. 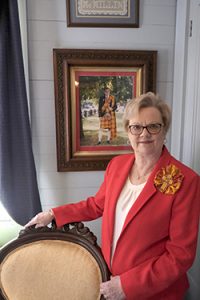 Evidence of this style home was uncovered when the McMillins were renovating the house.

In 1846, the house was sold to John Fontaine, who Carol said enlarged and embellished the structure, modeling it in the Greek revival style.

“The house, as constructed by Mr. Fontaine, had four front square columns probably with stairs coming up to the center of the first-floor gallery,” she said. Two front rooms were also added.

Unlike many of the antebellum homes in Vicksburg, the home was representative of what a middle-class family lived in.

The ceiling heights are lower in the house, only 10-feet tall. There are no plaster medallions and heart pine flooring was made to look like oak.

“Probably the most unique feature of the house is the oak grained floors,” Carol said. “At the time of the 1846 renovation it was popular to imitate stone with the use of wood and paint, and in this case, the floors are all heart pine but were painted or grained to look like oak.”

A similar practice was used on the wooden mantles in the home to make them look like marble.

Fontaine had been a lumber dealer, and had owned the property from Fort Hill Drive down to the river, which made it easy for steamboats to stop at the landings for his lumber business.

In 1853, Fontaine sold the house to John and Mary Harwood.

John Harwood had been a circuit clerk, Carol said, and the couple had six children.

Carol said that during the Siege, the grounds of the Harwood’s property had been used as the base camp for Battery No.  5, also known as the Harwood Battery.

A magazine, which resembles a small hill, was built for ammunition supplies and a 9-inch Dahlgren cannon was positioned on site.

Soldiers had dubbed the cannon The Mary Harwood, Carol said, after the lady of the house.

During the Siege, the family left the house, but it is not known where they fled. Today, the magazine still remains on the property.

Also, after Carol’s husband attended a reenactment, he brought home an exact replica of the cannon. It sits near the magazine and faces west where the fighting would have taken place.

The cannon had been used as a movie prop in the movie “Glory,” she said.

During the Siege, the home was damaged from the extensive shelling by the Union gunboats, Carol said. Evidence is visible on an interior wall of the house.

After the death of both John and Mary Harwood, their daughter Annie lived in the home. It was later willed to Annie’s cousin, Louise Maute Gaines and her husband, Charles.

The Gaines remodeled the home in 1928, to include indoor plumbing and electricity. They also added a two-story Colonial Revival portico on what was the back of the house.

Instead of facing the river, Carol said the couple wanted the house to face the street.

The house continued to remain in the Harwood family until 1973 until it was sold to William Hickman.

“He was a Vicksburg native living in California,” Carol said.

The house was turned into rental property until the McMillins bought the home.

Carol said following the purchase of the house, she and Lamar moved in and began building an addition.

“It was kind of like worse than camping for a year,” she said. “We had gas space heaters and were terrified we could burn the house down. So we only kept them on for a few hours while we were there.”

To stay warm the couple also used an electric blanket, and in the summer, to stay cool, they had access to only one window air conditioning unit. “It was pretty rough,” she said.

The addition was finally completed in 1978.

“I felt like I had arrived,” Carol said. “I had a good kitchen. I had good lights and I had air and heat.”

More renovations took place during those years, and just days prior to Steven’s birth, the couple held a big house blessing.

“We had a choir and an orchestra,” Carol said, with more than 700 people in attendance.

In addition to loving Civil War history, Carol said Lamar had also been a very good “Victorian.” “Too much was never enough,” she said.

From vintage photographs, family heirlooms and architectural pieces from around Vicksburg, the home has a cornucopia of collections Lamar had found interesting and unique.

One of these most cherished pieces, Carol said, is a Bokhara Persian rug.

“This is how I met my husband,” she said.

During his residency at a hospital in Minneapolis, Lamar purchased the rug at an auction. Carol said he wanted to learn more about it so he made a trip to the hospital library.

At the time, Carol was a high school senior working part-time at the library.

Because it was a medical library, Carol said, it had been a long shot to find anything on a Persian rug, but it did have a couple of good encyclopedias. “So I gave them to him,” she said.

“Evidently, I was polite, and he came back a couple more times and then asked if I would like to go to a dinner dance,” she said. “I didn’t even know him. I had to look and read the name off his white coat.”

But after considering the invitation, she decided to go.

The couple married in 1974 and spent their first year of marriage living in Scotland. Carol said Lamar was very proud of his Scottish heritage, so much so, he had bolts of tartan fabric woven representative of his clan.

In the home, there are also several pictures of him wearing his kilt.

Carol said she grew up in a small town in Minnesota, and her husband in Little Rock. While not Vicksburg natives, the couple certainly made Vicksburg their home.

Not only were they active in many community organizations, including the Vicksburg Foundation for Historic Preservation, Heritage Guild and Lions Club.

Their home, The Mary Harwood has been open during the Vicksburg Pilgrimage for more than 30 years.