Vicksburg women have turned dyeing fabric into works of art 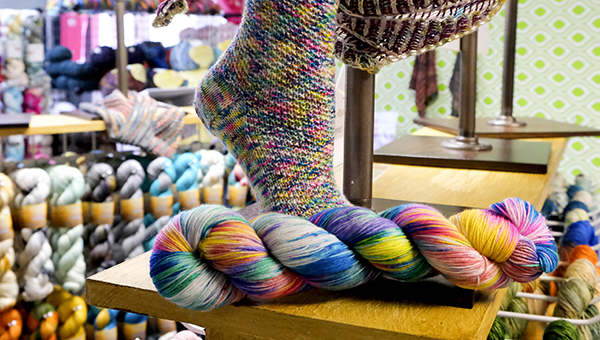 A table is set up in the corner of the room and holds several steam pans. Another is adjacent holding plastic containers of fiber reactive dye.

Although the space is not huge, it is big enough for Judy Busby and Emily Wolfe to make their custom hand-dyed yarn.

“And we are getting better and better all the time,” Wolfe said.

Busby and Wolfe started dyeing yarn a year ago, and now the women are traveling all over the Southeast selling their custom made fiber.

Busby, who is the owner of Fabs and More and the Whole 9 Yarns, began selling yarn in her craft shop, located on Halls Ferry Road, in 2017.

“After becoming an empty nester, I was looking for something to do, so I took up knitting,” Busby said.

But because there was no place to buy quality yarn in Vicksburg, she said, she decided to add it to her retail shop that specialized in fabrics and chalk paint.

“I thought I was just going to add a little yarn to the shop,” Busby laughed, but since sales have taken off, she now has racks of silk, alpaca and bamboo yarn and custom hand-dyed yarns.

Busby and Wolfe make the process of dyeing yarn look easy, but there are several steps that must be followed to produce their eye-catching colored yarn.

They begin by placing skeins of yarn in the steam pans that are filled with water and citric acid. All the yarn is wool.

To produce what the women call colorways, large syringes are filled with dye. It is then released onto the yarn in an effort to achieve the desired color.

“We use syringes to apply the color to the yarn because if you pour it, too much color goes on, but with the syringe, you can control it,” Busby said.

Early on Busby said it had been trial and error coming up with their colorways, but once they hit on something they liked, they would write the “recipe” down. “And I pull my recipe card every time I dye yarn,” Wolfe said.

Once the yarn reaches its desired color, it is rinsed and hung to dry.

The dyeing process is a two-person operation, Busby said, and on dyeing days, the women will typically do three sets, which equates to 70 skeins.

“There is an instant satisfaction when you dye yarn because you think, ‘I want to knit this.’ I mean I think this every time, but we can’t knit all the yarn,” she said.

Currently, Busby and Wolfe have more than 75 colorway recipes, many with names based on Greek Mythology, which include Zeus and Poseidon.

Other colorway names include Tennessee Whisky, which has been popular at fiber shows, especially the one held in Tennessee, Busby said.

Sweet Tea is another popular colorway.

“We had a woman who wanted to make a sweater for her husband, and she needed six skeins of Sweet Tea,” Busby said.

A skein of hand-dyed yarn costs around $30, Busby said, and each skein measures 463 yards.

The yarn business has become successful for Busby and Wolfe and the pair have been accepted into the Craftsmen’s Guild of Mississippi.

They also have traveled thousands of miles with their cargo trailer attending fiber shows and selling their wares.

“We have been to Atlanta, middle Tennessee, Fort Worth, Asheville and Canton, Texas,” Busby said, adding attending fiber shows is also a good way to connect. “We get followers and they follow us to shows. At a show in Ruston, we had about six to eight people that came for the day.”

The pair also do trunk shows, which is when they take their custom yarn and set up in a yarn shop. There they will sell their yarns and take orders.

Busby said they will also do custom orders and eventually hope to start wholesaling to yarn shops. They do have a website where people can place orders.

While dyeing yarn can get messy it is fulfilling, Wolfe said. “I will come home sometimes and have dye all over my arms,” she said.

With the resurgence of knitting, two years ago Busby was encouraged to revive the local fiber show and in 2018 started Fiber Fun in the ‘Sip.

Thousands attended and with its success, she held the second annual event in 2019.

There were 42 vendors who participated and 57 juried fiber classes, which included knitting, crocheting, spinning, weaving, yarn dyeing, felting and Kumihimo, which is the art of Japanese braiding. At the 2019 show, she also incorporated a knitting and spinning contest and a fashion show.

There was also a “mystery knit along” knitters could participate in.

As an added feature to the show, there is always a sit and stitch area, where crafters can enjoy jazz music and sip on the themed cocktail entitled a Tangle Mess.

“When you meet somebody that knits you are instant friends,” Busby said.