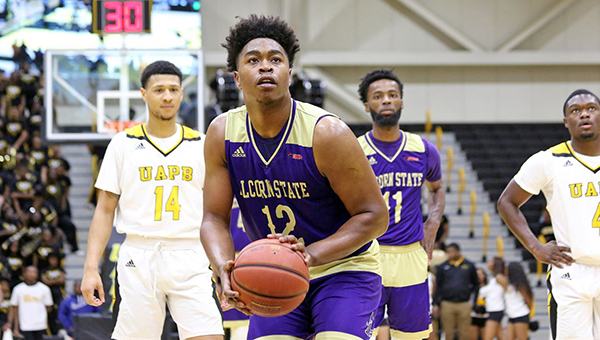 Alcorn State has found a simple formula for success — make a lot of baskets and score a lot of points.

Deshaw Andrews went 5-for-5 from 3-point range and finished with 30 points as the Braves routed Arkansas-Pine Bluff 82-54 on Monday for their third win in a row.

Alcorn has shot 46.7 percent from 3-point range (36-for-77) and is averaging 91.3 points per game during the winning streak that has moved it to within a half-game of first place in the Southwestern Athletic Conference standings.

Two of the three wins came on the road, Monday against UAPB (3-14, 2-3 SWAC) and Saturday at Mississippi Valley State.

“It feels good right now. When you’re not winning games, everyone has an opinion as to what’s going wrong and what we should be doing. When you’re winning, guys listen more and we don’t have to change as much,” Alcorn coach Montez Robinson said after Monday’s win. “It’s always good to win and we wanted to continue the road winning streak. The road team won every game in the SWAC this weekend and I’m glad we could be a part of it. Our guys are competing and we’ve given ourselves a chance to keep rolling back at home.”

Alcorn’s success during the SWAC schedule has come when it is shooting well. In its two losses to Prairie View A&M and Jackson State, Alcorn shot 40.9 percent from the field, 34.7 percent from 3-point range, and averaged 67.5 points.

In the Braves’ four conference victories, they are shooting 48.9 percent overall, 50.4 percent from 3-point range, and are averaging 92.3 points per game.

The Braves have been doing it with a variety of weapons, as Monday’s balanced effort showed. Andrews was 9-of-11 from the field for his career-high 30 points, but three other players scored at least nine points.

Maurice Howard finished with 13 points, Corey Tillery scored 10, and Troymain Crosby had nine points and 11 rebounds. Howard was 3-for-3 from beyond the arc.

Howard, Tillery and Andrews all have at least a dozen double-digit scoring games this season.
The Braves blew the game open with a 17-0 run that bridged halftime and left them with a 52-30 lead with 14:20 to play.

“It was one of those situations where UAPB had to decide who they wanted to pressure up on,” Robinson said. “They could pressure up on Maurice Howard or Corey Tillery outside, or they can pressure up on Troymain Crosby but he’ll blow by you. It just seemed like the spots were open for Deshaw on each possession and this was his night. He was left open a few times and he made them pay for it.”