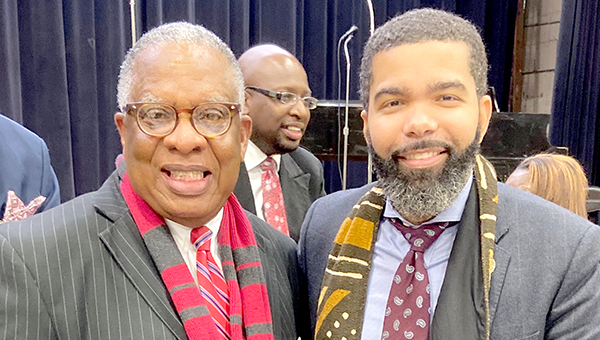 Blacks in America need to look beyond the politics of race and work to have a greater voice in determining their future, people attending Monday’s Martin Luther King Memorial Celebration at the Vicksburg City Auditorium learned Monday.

The 31st annual event was sponsored by the First Mississippi Chapter of Blacks in Government, the Vicksburg Branch of the NAACP and the city of Vicksburg.

“We have to reinvent how we consider what a prosperous economy looks like, what does that mean to our community and how do we strive to make what we see as a dignity economy — an economy that moves from cycles of humiliation to a cycle that identifies the apparent dignity in everyone’s life,” he said.

Dr. Martin Luther King, Lumumba said, was a prophet who understood there was more to the struggle for equality than race.

“Dr. Martin Luther King moved from a leader who more than merely made people uncomfortable about issues of race to identifying the economic pressures that leave us all shackled,” he said. “He threatened people’s way of building wealth and because he challenged it, and that is what ultimately made him dangerous.

“Most of us only know ‘I Have a Dream,’” he said, adding it is important that people understand King’s evolution that led him to look at the economic issues affecting blacks.

He also issued a challenge for the community and its leaders to do better for the next generation.

“And if we truly want to honor this prophet of God and build on what he taught us, then it’s important that we disrupt this American narrative that makes color synonymous with capital and move toward a more economically diverse unit of economics by and for the people as opposed to economics by a few people.”