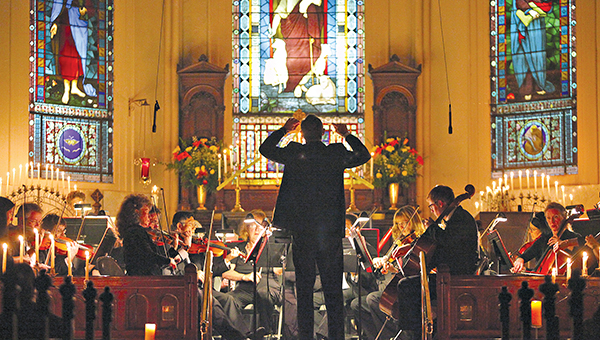 From his operas to his piano concertos and symphonies, Wolfgang Amadeus Mozart’s music touches the many facets of emotion.

His music has been described as having a natural flow and irresistible charm.

Sunday, area residents will have the opportunity to experience some of the Austrian composer’s compositions during the Mississippi Symphony Orchestra’s candlelight concert at the Church of the Holy Trinity, 900 South St. The concert is titled “Mozart by Candlelight.”

The musical event is sponsored by the Four Seasons of the Arts and Trustmark Bank.

Four Seasons of the Arts board member Carol McMillin said the candlelight concert has been offered in Vicksburg for more than 10 years and is part of MSO’s chamber series, which is comprised of a smaller group of musicians rather than the full orchestra.

“The symphony performs a chamber concert in Jackson, annually,” McMillin said, which is then followed by the concert in Vicksburg.

Like the Jackson performance, the orchestra will perform under the direction of Maestro Crafton Beck. Mimi Linehan will also be featured on French horn during the concert.

McMillin said a variety of composers have been highlighted during the annual candlelight concert performances, with several hundred patrons turning out for the “elegant” event.

“It’s a breathtaking setting that kind of takes you back to the time of the composer,” McMillin said. “The concert is delightful and well done.”

The concert will begin at 7 p.m. and is free, but donations are encouraged.

The MSO tours statewide as a full orchestra, a chamber orchestra, and as one of three resident ensembles – the Woodwind Quintet, the Brass Quintet and String the Quartet.