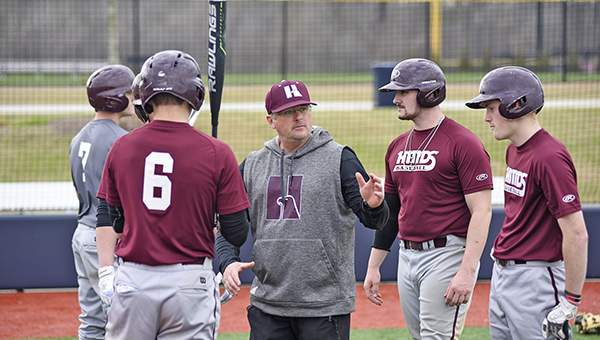 Enid, Oklahoma, is a sleepy farming town in the northern part of the state whose biggest claim to fame is having the largest grain storage capacity in the United States.

It’s not the type of place most people aspire to visit, unless they play junior college baseball. Then it’s Mecca, Cooperstown and Las Vegas rolled into one.

Enid is the site of the National Junior College Athletic Association’s baseball World Series. Hinds Community College has gotten there twice in the past six years, and head coach Sam Temple thinks it’s about time to go back.

“If the coach does it right, this could be a really good, fun bunch. We’ve had an opportunity to go to Enid as much or more than anybody else, and I like that place,” Temple said with a grin. “This is a bunch that could really have a chance to take us back.”

Temple’s optimism is based on a loaded roster. He had eight players sign with four-year schools in December, and believes several could be picked in the Major League Baseball draft in June. Several Hinds alumni have been drafted in recent years after moving on to four-year programs, but none have gone directly to the pros since former Warren Central star Beau Wallace was picked by the Pittsburgh Pirates in the 12th round in 2013.

All-America catcher Pablo Lanzarote, who hit .365 with eight home runs and 30 RBIs as a freshman in 2019, heads the list of this year’s prospects.

“We have four or five guys that legitimately have a chance to go somewhere in the draft. That’s a big emphasis,” Temple said. “When I came into the program I really wanted to promote moving on to four-year schools and having an opportunity to play with a great education. Then it moved to having a lot of Division I guys and some of the bigger schools coming in to get them. Now we’ve tried to say, ‘What’s the next level?’ We feel like the next level is trying to promote some guys that have draft opportunities.”

“Our pitching can be a real handful. There’s a lot of them, and they’re really good,” Temple said.

Hinds’ season begins Feb. 8 in Raymond with a doubleheader against Dyersburg State Community College, but the road to Enid started last week in Vicksburg. Heavy rain and a wet field forced the Eagles out of their home base in Raymond and over to the artificial turf fields at Sports Force Parks on the Mississippi.

The Eagles conducted two days of practice and scrimmages at one of their alternate homes. The team played two games there last season, and alternates between it and Smith-Wills Stadium in Jackson when its own Joe G. Moss Field is too wet to play on.

“Any opportunity I have to get to my hometown, I’m going to do it,” said Temple, a Vicksburg native. “But us being the area junior college, and the remarkable job the city and Sports Force and everybody involved has done putting these facilities in here, with the weather this week having the opportunity to come over here and work out is certainly a great blessing to us.”

Vicksburg will play another role in what the Eagles hope is a memorable season. Seven players from Warren County are on the roster this season, all of them from Warren Central — Vantrel Reed, Caleb Sterling, Hank Holdiness, Grayson Shealy, Christian Oakes, Farmer Abendroth and Sean Daily.

Five of the seven Warren Central alumni are freshmen, and Temple said most will work their way into the sophomore-filled veteran lineup as role players. A couple, however, seem slated for bigger roles.

Oakes is a sophomore pitcher returning from an arm injury. Temple said he’s worked hard to get back in shape and should be a key part of the pitching staff.

“He’s done a tremendous job with his conditioning and his body. His velocity is up. He has one of the better breaking balls on the team. I see him throwing a lot of quality innings for us this year,” Temple said.

Reed is an infielder who hit .414 for Warren Central last season and was The Vicksburg Post’s Player of the Year in 2018 and 2019. Sterling, another freshman, had a .320 career average in three seasons as WC’s starting catcher.

Temple said all three players will play several positions in the field. Sterling and Daily will back up Lanzarote at catcher, and Reed will be a utility player. Sterling and Reed are also expected to contribute out of the bullpen.

“Caleb will be one of our top catchers and pitch some for us in relief. We look for him to be a mainstay in our lineup, probably somewhere in the middle,” Temple said. “We play a doubleheader every time we play. So having two quality catchers with him and Pablo, and even Sean Daily, is great.”

Temple had plans to use Reed — a shortstop in high school — at both middle infield positions and the outfield to get him on the field.

“I really can play anywhere. He can put me in left, some days I’ll be at second. I’m an athlete. I can play anywhere. I just hope I’m in the lineup,” Reed said, adding that the competition, “Motivates me more to grind every day and get better every day. It’s a lot of talent out here. We’re all good, so we have to step it up a little and grind.”

Sterling was also fired up about the opportunity to get into the lineup as a freshman.

“Going from a high school to a college, you always want to look forward to starting as a freshman. That’s every freshman’s dream, even if it’s JUCO, D-I, NAIA, anything like that,” Sterling said. “It’s hard. You’ve got to know how to work and deal with a lot of things, a lot of difficulties.”

In the two-year cycle of junior college, many seasons are boom or bust as talent comes and goes. Hinds reached the national championship game in 2014, got back to the NJCAA World Series in 2017, and has a respectable 54-41 record over the past two seasons.

Temple believes this year’s team is on par with the 2015 and 2017 teams in terms of talent and potential.

“I believe this is one of the better groups of personnel that we’ve had in a long time,” he said. “Fourteen and ’15 were really fun to play for a national championship, and we went back to the World Series in ’17 and played for some regionals in between. The last state championship we won was in ’15, so we’re really looking to get another one of those. I think we have the bunch that can do this.”

Reed has even bigger goals.

“Everybody’s mindset on this team is to go to Oklahoma and win it,” Reed said. “Not just be there and enjoy the World Series. We’re trying to win it all. We’re trying to go undefeated in the state and win everything we play.”