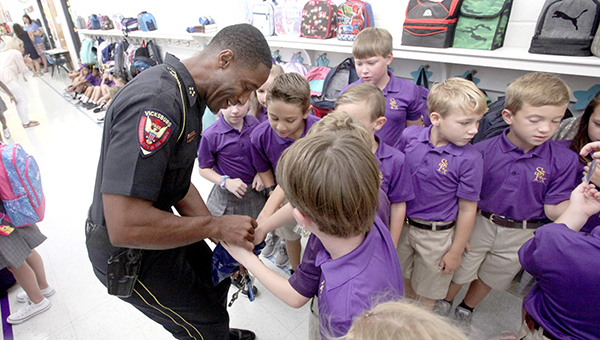 Vicksburg Police Chief Milton Moore hands out bracelets and badges to students in the hallway before class during the St. Francis Xavier Elementary School in August. (Courtland Wells/The Vicksburg Post)

A special Mass by the Most Rev. Joseph Kopacz, bishop of Jackson, and an economic development update on Vicksburg by Mayor George Flaggs Jr. are among the events planned for Vicksburg Catholic Schools’ observance of Catholic Schools Week.

Begun in 1974, National Catholic Schools Week is an annual celebration of Catholic education in the United States. The weeklong observance focuses on the value Catholic education provides to young people and its contributions to the church, community and our nation.

“This is the 46th year that we’ve celebrated it nationally, and the national theme for this year is ‘Learn, Serve, Lead, Succeed,’ and that is our focus,” said Karla McHan, St. Aloysius principal. “Each day we just take a different aspect of Catholic Education and the importance of it in our community and our country, and focus on that.”

One day, she said, focuses on community and includes Flaggs’ economic development update.

“This is one way for our students to really understand what the Vicksburg community is all about and what opportunities there are for them after graduation,” McHan said.

She said the school invites members of the community to talk about their experiences, why they decided to make Vicksburg their home, and what they are doing to help Vicksburg grow and provide more opportunities in the future for young people to come back.

What sets Catholic Education apart from traditional public school education, McHan said, “Is the whole student experience — the mind, body and soul aspects of education and trying to make sure that we touch on those.”

Vicksburg, she said, has a long tradition and legacy that Catholic schools in the area have developed for more than 160 years.

“We just try to continue that legacy,” she said, adding about 60 percent of the students attending Vicksburg Catholic Schools are non-Catholics.

“We invite people to come visit,” said St. Francis Xavier principal Mary Arledge. “Once they walk in the door, it’s just a different atmosphere. It’s not about whether you’re Catholic or non-Catholic, we focus on faith traditions and bringing Jesus and God into their (the student’s) world. It’s our atmosphere. Our teachers work well together and they want the best for each student.

“Just being able to reach each student is something we’re able to do more than some schools are able to do,” she said. “The emphasis on education is very important and the learning aspect and being able to do it in a loving and Christian environment.”

Other activities planned for the week-long observance include:

• Monday: Proclamations by Gov. Tate Reeves and Flaggs during a special program at St. Francis Xavier followed by student-led tours of the school. Vicksburg Chamber of Commerce members and officials with the U.S. Army Engineer Research and Development Center will read to students.

• Wednesday: Vicksburg Catholic Schools will host an open house for prospective families from 10 a.m. to 1 p.m.

• Thursday: The schools will hold a teacher appreciation luncheon.

• Friday, the students will be honored.