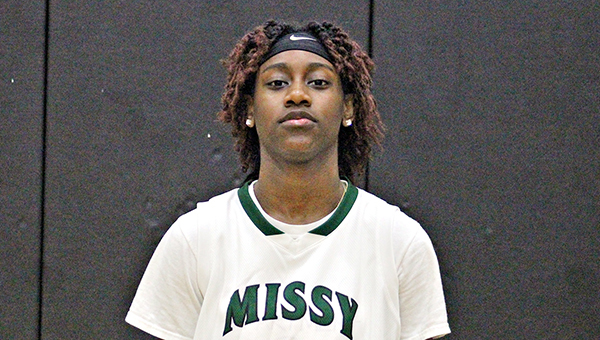 Vicksburg High freshman Layla Carter had 16 points and 12 rebounds as the ninth-grade Missy Gators beat Clinton 40-25 in the semifinals of the Little Six Conference tournament on Thursday.

MADISON — The ninth-grade Vicksburg Missy Gators are one win away from perfection and a championship.

Layla Carter finished with a double-double, totaling 16 points and 12 rebounds, as Vicksburg beat Clinton 40-25 in the semifinals of the Little Six Conference girls’ basketball tournament on Thursday.

Vicksburg won despite making just 15 of 44 shots from the field (34.1 percent) and 10 of 20 from the free throw line. Coach Deatra Robinson-Cable said they were able to pull through by making adjustments on the fly.

Vicksburg led 23-16 at halftime, but never let Clinton get close in the second half.

“We did not shoot well. We got in a shooting rut and never got out of it, so we had to put the ball on the floor and get to the basket,” Robinson-Cable said. “That’s what I love about these girls, is they are coachable kids.”

Vicksburg (15-0) will play either Germantown or Northwest Rankin — who played in a semifinal later Thursday night — in the championship game Saturday at 1:30 p.m. at Germantown High School.

Vicksburg’s ninth-grade team has not won the Little Six title since the 1990s.