Threadgill sentenced to more time in connection to kidnapping, assault 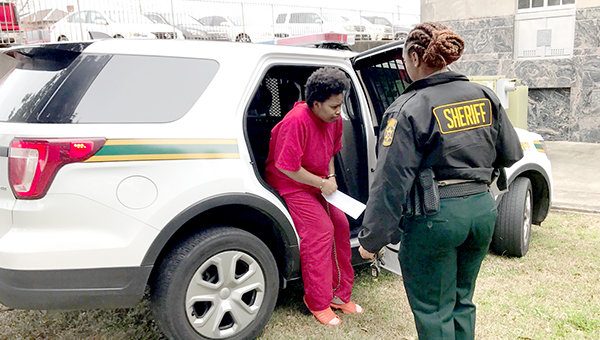 A Georgia woman charged with kidnapping and felony eluding involving in a high- speed chase with Warren County Sheriff’s deputies in March 2019 has been sentenced to 25 years in prison.

Circuit Court Judge M. James Chaney on Wednesday sentenced Sharae Dominique Threadgill, 22, to 20 years on the kidnapping charge and five years on the eluding charge. The charges are part of a series of crimes committed by Threadgill and Jalen Sean Benton, 19, that began in Georgia and covered three states.

The crime spree ended in Vicksburg with a high-speed chase that included the kidnapping of two people.

Benton pleaded guilty to charges of kidnapping and aggravated assault on a law enforcement officer in connection with the chase, and was sentenced to a total of 25 years, 9th Circuit District attorney Ricky Smith said.

Benton was sentenced to 20 years on the kidnapping charge and 25 on the assault charge. The sentences will run concurrently with each other, which means Benton would serve a maximum of 25 years.

The couple was already wanted for a murder in Columbus, Ga., a Burger King robbery in Demopolis, Ala. and a McDonald’s robbery in Brandon when they entered Warren County on Interstate 20 at Bovina and were seen by Warren County sheriff’s deputy Dustin Keyes.

Keyes followed the car and attempted to stop it at the U.S. 61 North exit on I-20. The car pulled into a parking lot and the couple got out of the car and ran off on foot with Benton firing a shot at Keyes.

The duo then carjacked a Chevy Tahoe at the nearby Sonic Drive-In, speeding north on U.S. 61 with the carjacking victims held hostage and one forced to drive at gunpoint.

At Drummond and Bowmar Avenue, the hostage slammed on the brakes and she and the other hostage jumped from the SUV.

The chase continued to Pearl Street, where a deputy was able to shoot out a tire. The vehicle stopped just north of Chickasaw Road on North Washington.

Benton and Threadgill got out of the car and were arrested without incident.