VHS freshmen closing in on a championship 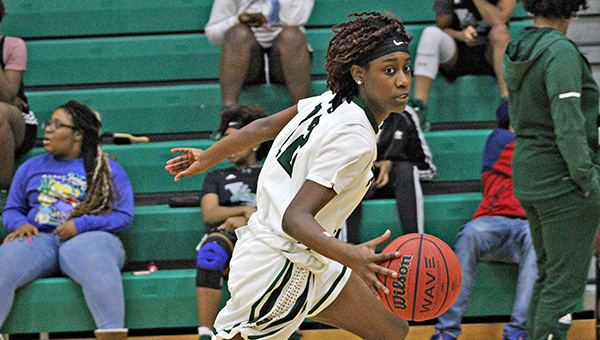 Vicksburg High freshman basketball player Layla Carter (12) brings the ball up the floor during a drill in practice on Wednesday. The ninth-grade Missy Gators are undefeated this season and two wins away from claiming the Little Six Conference tournament championship. (Ernest Bowker/The Vicksburg Post)

The purpose of junior high basketball, Vicksburg coach Deatra Robinson-Cable says, is to develop players capable of winning championships when they’re juniors and seniors and not freshmen.

A moment later, however, she smiles and admits that the goals can change when a team gets as close as hers is to a title.

The ninth-grade Missy Gators are undefeated and two wins away from claiming their first Little Six Conference tournament championship in recent memory. They’ll play either Brandon or Clinton in the semifinals Thursday afternoon at 4 p.m. at Rosa Scott High School in Madison.
The championship game is Saturday at 1:30 p.m. at Germantown High School.

“This is just a talented group of kids,” Robinson-Cable said. “They’ve been playing together for a long time. Their parents started them as young kids and let them play together. The secret is with them. We’re just reaping the benefits.”

The Missy Gators beat Pearl 59-38 in the quarterfinals on Tuesday behind the kind of balanced effort that has powered them all season. Nine of the 10 players on the roster scored a point, and four finished with six points or more.

Robinson-Cable said all of her starters are capable of carrying the team, but one of the keys to their success is the role each one fills. Just as importantly, she added, all of them are willing to do what’s needed for the greater good.

“Tiara Sims has developed so much as a point guard, and Janiah Caples is a team leader. Her basketball I.Q. has come a long way this year. JaNa Colenburg can shoot the lights out, and she’s a consistent shooter. Layla Carter is our superstar. She can take over a game if you need her to do that,” Robinson-Cable said. “Even our bench players are strong and coachable. That’s one thing I love about this group. It’s hard to find five girls that you can put on the floor at any time and it doesn’t matter where they play, they’re going to be coachable and do what you ask.”

Several of the freshmen are likely to be moved up to the varsity roster next week to help that version of the Missy Gators with their stretch run. The varsity team is currently tied for first place in Region 4-5A, and Robinson-Cable said some of her players can help add depth and fill some needs in the rotation.

First, though, there is the unfinished business of the Little Six Tournament.

This same group of players lost in the semifinals of the eighth-grade tournament in 2019, and Caples said that experience has provided some fuel for this season.

“We want to win because we were so close last year,” said Caples, who scored 10 points Tuesday against Pearl. “We’re trying harder this year. We’re more focused.”

Even if they win a championship this week, they’re confident it won’t be the last. Caples said she and her teammates are well aware that they’re working toward something bigger and better than just a ninth-grade championship.

“We want to go to the varsity and be the first girls to win a state championship in the history of Vicksburg High School,” Caples said. “We want to get better so we can get on the varsity. We don’t want to just win the Little Six. We want to win a gold ball.”