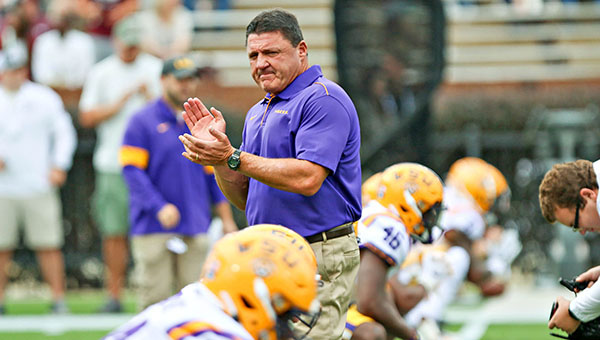 LSU football head coach Ed Orgeron, who led the Tigers to an undefeated season and the national championship in 2019, agreed to a six-year contract extension on Friday. (Walter Frazier/For The Vicksburg Post)

BATON ROUGE, La (AP) — LSU football head coach Ed Orgeron has agreed to a new contract extension worth more than $7 million annually and which runs through the 2026 season, the university announced Friday.

The new six-year agreement comes on the heels of the Tigers’ 15-0 national championship season that concluded earlier this month with a 42-25 victory over Clemson in the national title game in New Orleans.

Contract language, which remains subject to approval by the board of supervisors, calls for a base salary of $6 million plus various performance-related bonuses.

This marks the second straight year in which Orgeron has received an extension from LSU. His deal in 2019 added two years to his contract and increased his annual salary to $4 million.

According to USA Today, Orgeron’s salary in 2019 was tied for 28th among all FBS coaches. The new contract would rank fifth, behind Clemson’s Dabo Swinney, Alabama’s Nick Saban, Michigan’s Jim Harbaugh and Texas A&M’s Jimbo Fisher.

Orgeron earned approximately $1.7 million in performance bonuses — which are included in most head coaches’ contracts — during the Tigers’ national championship run.

“Coach O has set a new standard at LSU,” athletic director Scott Woodward said. “He has proven that he is not only a championship coach, but also a leader of a program committed to doing things the right way. He has represented our institution and our state with great pride, on and off the field of play.”

Woodward added that the new contract “should make clear our commitment to Coach O and the direction of our football program.”

The 58-year-old Orgeron was the consensus 2019 national coach of the year.

He has led LSU to a 40-9 mark since initially taking over on an interim basis in 2016. Of his 40 wins at LSU, 12 have come against teams ranked in the top 10 at the time of the match-up, including seven in 2019, which stands as the most in college football history for a single season.

His 40 wins through the first 49 games of his career ties for the most by any coach in LSU history.

Orgeron grew up in Larose, Louisiana, about 60 miles southwest of New Orleans, and passionately followed LSU football as a child.

“I’m happy to represent LSU and this great state,” Orgeron said. “My family and I are very grateful, and I look forward to working as hard as possible to continue to win championships at LSU.”

Orgeron was an LSU assistant and recruiting coordinator when he took over as interim coach after Les Miles was fired four games into the 2016 season. He was retained on a permanent basis before LSU’s bowl game that season.

His promotion represented a lifelong dream for the Louisiana native who won a state title as a player at South Lafourche High School and received a scholarship to play for LSU, only to drop out of school briefly before resuming his college playing career at Northwestern State.

Following that, he embarked on a long, winding coaching career that included stops as an assistant at Syracuse, Miami, Tennessee and USC, as well as an unsuccessful stint as head coach at Ole Miss. He also briefly served as a defensive line coach for the New Orleans Saints.

This past season, he oversaw the greatest season in the 126-year history of LSU football, spearheaded by a nation-leading offense that broke a slew school records. Joe Burrow became just the second Heisman Trophy winner in LSU, and the school’s first quarterback to receive college football most prestigious individual award.