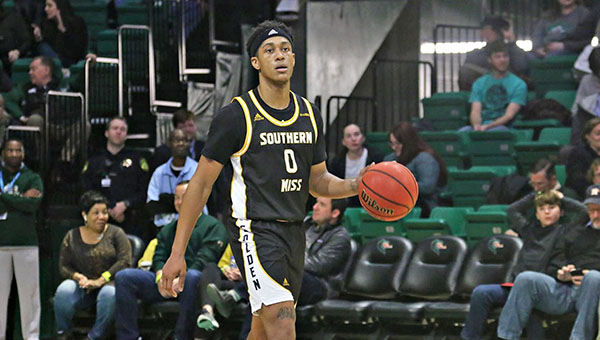 Calling a team’s sixth win of the season “significant,” when it comes in the next-to-last week of January against an opponent that has a .500 record in conference play, might seem like a bit of a stretch.

The Golden Eagles beat UAB 84-77 on Thursday for their first road win of the season and second in a row overall. It’s the first time this season that they’ve won back-to-back games and, with another road trip to struggling Middle Tennessee (4-6, 0-7 Conference USA) on tap for Saturday, it also raised hope that they’re finally getting some traction in the standings.
Southern Miss had lost its first seven road games, and five in a row overall before this week.

“A lot of people have the tendency to count our guys out, and this was very satisfying. That’s a significant win for Southern Miss,” Ladner said.

The win over UAB followed an 81-68 victory over Rice last weekend. The two games are the first this season in which Southern Miss (6-14, 2-5) has scored more than 80 points against a Division I opponent. It scored 90 or more against Division II Delta State and NAIA members William Carey and Tougaloo.

LaDavius Draine and Gabe Watson both had career highs against UAB with 28 and 27 points, respectively. They were the first Southern Miss teammates with 25 points or more in a game since 2009.

The Golden Eagles also showed some resiliency down the stretch. They led by as many as 16 midway through the second half, and then the Blazers put together an 11-2 run to get within five with 1:31 to play. Watson answered with a jumper, and in the final minute Draine made four free throws as the Golden Eagles went 7-of-8 from the line.

Southern Miss shot 68 percent in the second half (17-of-25) — its best percentage in any half this season.

“We never got rattled,” Ladner said. “One of the things it takes to win on the road was controlling the tempo, and I thought we did a great job at that the first 35 minutes. It’s funny to mention those guys as elder statesmen, but they’re sophomores and juniors and that’s the nature of the team. They looked like true veterans, and I was proud of them.”