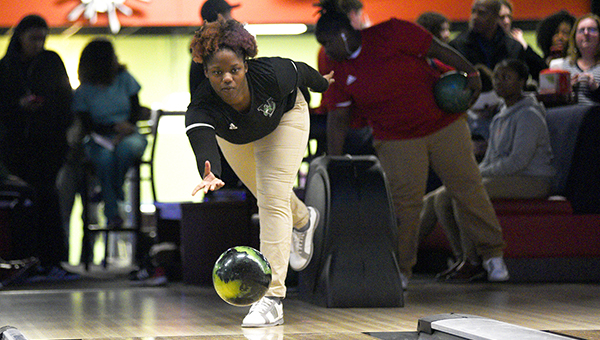 There’s an old saying in these parts that whenever Warren Central and Vicksburg High play in anything, whether it be football or Tiddlywinks, it will be competitive.

Bowling falls on the latter end of that scale, but still proves the adage.

Peyton McBroom had the high game with a 174, as Warren Central beat Vicksburg on a pin total tiebreaker in a boys’ bowling match Thursday at Fun Lanes. The Vikings totaled 2,187 pins across six games to 2,066 for the Gators to break the 3-3 tie.

Vicksburg won the girls’ match 2-1 as Andreya McGee posted a 138 average for three games. McGee also had the highest single-game score in the match, with a 164 in her third and final game.

The final regular-season match for both teams sent them into next week’s MHSAA regionals as they continue to build their way up. Both programs are in their third year of existence, and second with Fun Lanes as a home base. In the 2017-18 season they had to drive to Clinton for practice and matches.

“All of the coaches keep asking me what I’ve done different. I just tell them we got a lane here in town. It was a big difference. When we got the lanes here we got to practice four days a week. Before, we had one day to practice,” Vicksburg coach Stacey Banks said.

Vicksburg’s tournament is Jan. 31 at 10 a.m. at Depot Family Fun Center in Philadelphia. The top two teams will advance to the Class II state tournament Feb. 12 in Jackson. The boys’ team has a 3-6 record after Thursday’s match, while the girls are 5-4.

Khalyl Carson led the Gators with a 122 average on Thursday, while Dennis Cage had the high game with a 156.

Warren Central, meanwhile, will have to go through Class III powers Clinton and Brandon to reach the state tournament. The boys’ team will be the No. 4 seed and the girls No. 5, which will pair them with Pearl and Germantown in the first round of the region tournament on Jan. 30 at Fannin Lanes in Flowood.

The Vikings improved to 4-4 with Thursday’s win, and the Lady Vikes fell to 3-5.

Josh Smith the best average Thursday for the boys’ team with a 131 across three games. Chris Bates averaged 118 and McBroom 117.

For the girls, DeArryana Harris had the best game and average with a 129 and 114, respectively.