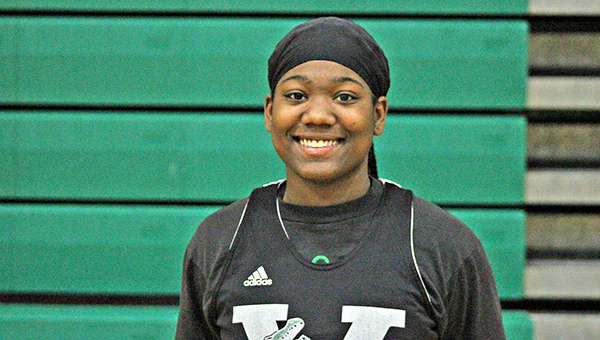 Vicksburg High basketball player Sha’Kora Knight scored 15 points, including the go-ahead basket in the final minute, to lead the Missy Gators to a 38-35 win over Ridgeland on Friday.

The Vicksburg Missy Gators avenged their only region loss and moved up in the pecking order for the MHSAA Region 4-5A tournament at the same time.

Sha’Kora Knight finished with 15 points, including the last four of the game in the last 40 seconds, as the Missy Gators beat Ridgeland 38-35 on Friday.

The victory guarantees Vicksburg (14-7, 4-1 Region 4-5A) will be no worse than the No. 2 seed in the region tournament in three weeks. Vicksburg can earn the top seed by winning at home against Provine on Jan. 31.

The Lady Titans led 35-34 in the final minute, when Vicksburg’s Tiarra Jones stole the ball and sent an outlet pass to Knight. Knight made a layup and the ensuing free throw to put the Missy Gators ahead.

Knight then stole the ball at half court with three seconds left and made one of two free throws to seal it. A long shot by Ridgeland at the buzzer was off the mark.

Destini Sims finished with 13 points, five rebounds and four steals for Vicksburg, while Jones had seven points. The Missy Gators made 11 of 14 free throws, but were just 12-for-41 (29 percent) shooting from the field. Half of their baskets came from Knight, who went 6-for-10.

St. Al led 23-21 at halftime, and then hung on as the teams muddled through an ugly second half. They combined for only five field goals in the second half — St. Al had none in the fourth quarter — and to go 6-for-20 from the free throw line.

The games have been rescheduled for Friday, Feb. 7, as a girls-boys doubleheader beginning at 6 p.m.