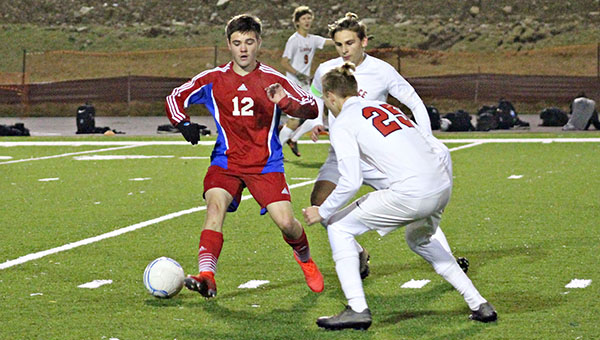 A strange Friday for Warren Central’s boys’ soccer team started with a power outage, flowed into a victory, and ended with dreams of playing at least one more game this season.

DeQuarian Buck and Tony King scored goals three minutes apart late in the first half, and the Vikings’ defense held up down the stretch as they beat Florence 2-1.

The game was played at Vicksburg High’s Memorial Stadium after a blown transformer knocked out power at Warren Central just before 4 p.m. The outage forced the cancellation of a basketball doubleheader between WC and Madison Central — it was rescheduled for Feb. 7 — and the soccer teams to scramble across town 90 minutes before the scheduled 5:30 p.m. kickoff.

“(Vicksburg Warren School District athletic director Preston Nailor) asked if we wanted to postpone it until later in the day because they may have it fixed. I said we want to go ahead and play it now, so can we go to Vicksburg? They were open tonight, so we were able to get it here. Thanks to Preston, he got everything shifted over here real quick,” Warren Central coach Greg Head said.

Despite earlier reports that Warren Central (15-5, 3-3 Region 4-6A) had been eliminated from playoff contention, it will go to the last day of the MHSAA’s regular season still with hope.

Murrah has not beaten Clinton in five meetings since 2014, but is not a pushover. It took a competitive 3-1 loss to the Arrows in Jackson on Jan. 17, and then pushed region champion Madison Central to overtime on Friday night before losing 3-2.

If Clinton wins on Saturday, Warren Central will miss the playoffs for the first time since 2011 despite being ranked No. 11 in Mississippi by MaxPreps.com and being 10 wins above .500.

“It’s weird, but we’re having hopes that Murrah can come through and beat Clinton and we won’t end the season here,” King said.

The Vikings overcame a missed penalty kick in the 13th minute against Florence to score two quick goals and take a 2-0 lead into halftime.

Buck turned and wheeled on a pass in the 34th minute to push it past Florence’s keeper, and then in the 37th King arced a free kick from the top left corner of the box into the right side of the net.

Florence got a goal back early in the second half, when Austin Lamb deflected a corner kick into the net in the 46th minute. Warren Central’s defense held up, though, despite a persistent effort by Florence’s attackers.

Florence (16-5) took six of its seven shots, and WC keeper Ben Vroman had five of his six saves, in the second half.

Head was hopeful the Vikings haven’t played their last game this season, but said Friday would be a satisfying finish if they had.

“If Murrah beats Clinton tomorrow, we’re in and they’re out. Is that going to happen? I don’t think so. But what we did today was made a point,” Head said. “(Florence) was ranked 10th in the state and we were ranked 11th. We came out here and wanted to show everybody that we should be ranked 10th and they should be behind us.”

Warren Central (11-9) missed the playoffs for the first time since 2011, but still was able to finish with a winning record for the third season in a row.