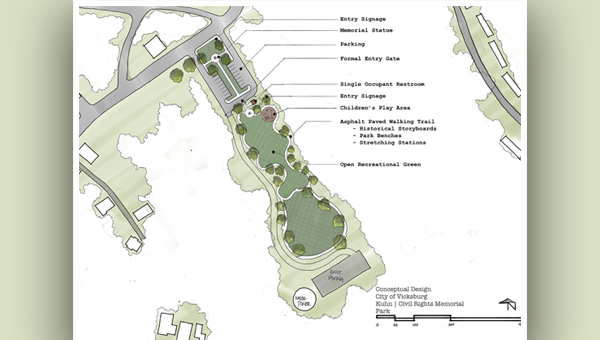 This January 2020 conceptual design of the civil rights park that will soon be completed at the site of the former Kuhn Memorial Hospital. (Wier Boerner Allin Architecture)

The Board of Mayor and Aldermen has hired a Jackson architect firm to design and oversee construction of the proposed civil rights park at the Kuhn Memorial Hospital site.

The board Friday approved a contract not to exceed $15,000 with Wier Boerner Allin Architecture. Under the contract, the company will design the park, prepare the construction documents, handle negotiations with the contractor and oversee the park’s construction.

The cost of the first phase of construction is not to exceed $200,000, Mayor George Flaggs Jr. said. He said the city will apply for a state Department of Wildlife, Fisheries & Parks grant for the park’s walking trail.

The board hired former city grants coordinator Marcia Weaver to assist with the grant application at a rate of $75 an hour not to exceed 50 hours.

“The first phase is to build the park and put the signage in it,” Flaggs said.

Flaggs in December appointed committee of Toni Lowe-Fisher, Debra Goodman, Shawn Jackson, Mary Logan, Carol McMillin, Jeff Richardson and former Mayor Robert Walker to develop the design and concept for the park at the former hospital property, which will include a walking trail and serve as an educational resource by highlighting the importance of Kuhn and the civil rights era to the community.

The park is expected to include monuments to Kuhn and Dr. Martin Luther King, and markers showing the contributions of area residents, churches and organizations to the civil rights movement.

Original plans for the Kuhn property envisioned a multi-use development of homes and retail businesses and recreation areas. After the board failed to find a non-profit organization to do the development, Flaggs suggested the park.