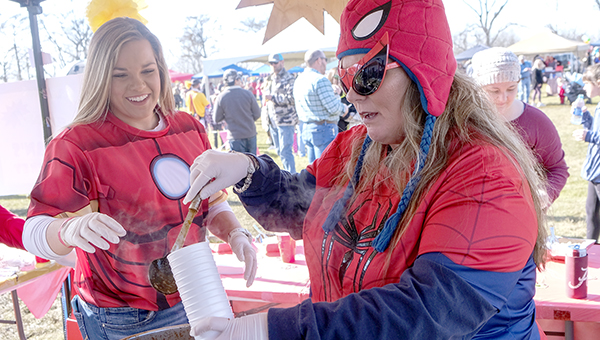 The Mississippi River was lapping the bank near Lady Luck Casino, the ground was soggy from several days of rain, but the sun was bright, the crowd was large and the chili warm for the 11th Chili for Children Cook-off.

About 600 people attended the annual event, Radio People station manager Sabrina Lynn said, adding the cook-off and silent auction were expected to raise close to $10,000. “We are still waiting on the results of the silent auction,” she said.

Sponsored by The Radio People, the latest edition of the cook-off to benefit the Warren County Children’s Shelter and Jacob’s Ladder featured 15 teams offering a variety of chili recipes ranging from mild to hot.

As they ate their samples of chili, diners were able to look at classic cars; children played in bounce houses, got a balloon sculpture from a clown or had their face painted. The theme for the cook-off was based on superheroes.

Dressed as Batman, Chris Burks, who has a morning program on River 101.3, was one of the diners touring the booths on the field by Lady Luck.

“The turnout is great,” he said. “And it’s all to help the Children’s Shelter and Jacob’s ladder.”

Not far from Burks, a crew from Ameristar Casino was ladling out chili to visitors in a booth promoting the superhero The Flash.

“We decided to do something different,” Amy Buckman, the casino’s hospitality manager, said. “We decided to uses a lesser-known superhero. Everyone is familiar with Superman and Batman, but not many people know The Flash.”

Dressed as The Flash, Mark McGraw, one of Ameristar’s marketing coordinators, said this was the first year the casino has participated in the cook-off.

A veteran cook-off group was wearing capes as The Super Zeroes and displaying Zero candy bars.

Another group making their initial appearance at the cook-off was the ABATE Avengers. The name, Vanessa Shiers said, stands for American Bikers Aimed Toward Education, a motorcycle rights organization that brings attention to issues affecting riders.

“We’re here to tell people about our organization and to help the children of Warren County,” Shiers said.

First place went to the team from Northside Baptist Church, while Mutual Credit Union’s team took second. The Super Zeroes, and their display of candy bars, came in third.

The Abate Avengers took home the team spirit award and the team from Elevate Church won the People’s Choice Award.