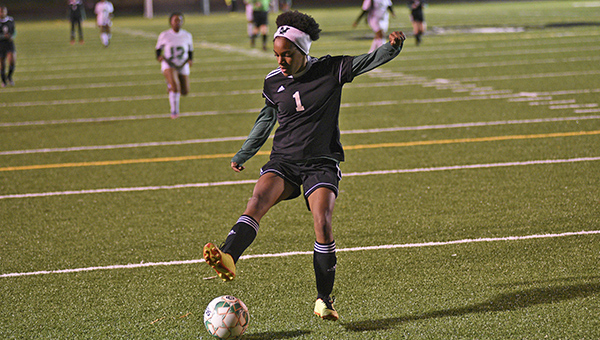 Vicksburg High's McKenna Elder (1) stops a ball against Jim Hill earlier this season. The Missy Gators will host Neshoba Central in the first round of the MHSAA Class 5A playoffs Tuesday at 5:30 p.m. (Courtland Wells/The Vicksburg Post)

The Vicksburg Missy Gators know they have something to prove the next time they step on the field.

Sure, they won 11 games. Sure, they dominated their region opponents. Without a win Tuesday, however, in the first round of the MHSAA Class 5A girls’ soccer playoffs, there will be a question of how good were they, really?

“I feel like, as a team, it’s a little bit of nerves because it’s new territory,” VHS junior goal keeper Rose Thuha said. “There’s also a lot of determination to prove we didn’t get this (region) title because it was handed to us. We’re here because we don’t want to be pushed on. I feel like we can push through and win.”

This is new territory for the current group of Missy Gators, if not the program as a whole.
Vicksburg won state championships in five of the first seven seasons after the MHSAA sanctioned it as a sport in 1995. It hasn’t won a playoff game since 2010, however, and won a total of 12 games the past three seasons.

Things turned around this year with a young roster — there are twice as many eighth- and ninth-graders (10) as juniors and seniors (5) — that provided hope for the future.

“It’s really good seeing all the work we’ve been putting in coming into play,” Thuha said. “It’s new and exciting, and I’m excited that we can have people take our soccer team seriously.”

They’ll take the Missy Gators a lot more seriously if they can win Tuesday. Vicksburg has not played Neshoba in at least 10 years, but the Rockets have a track record of success. They won back-to-back region championships before finishing second to Ridgeland in Region 3-5A this season.

Each team has three players with nine or more goals, and each has played a modest schedule.
If there is one big difference, it’s the roll they’re on entering the postseason. Neshoba Central has won seven in a row, while Vicksburg lost its regular-season finale to Raymond, 3-2, a week ago.

The winner of Tuesday’s game advances to play either Saltillo or New Hope on Saturday.

“We’re about even according to the stats. It’s not like the matchups are out of the water. We can make it a fair and even game if we put in the hard work,” Thuha said.

With so many young players, there’s also hope that a win Tuesday — or even a strong showing — can propel the program forward. Of the five players who have scored goals this season, three are eighth-graders, McKenna Elder (13 goals) is a junior, and only Haleigh Erwin (27 goals) is a senior.

“For the seventh- and eighth-graders, it’ll be big for their confidence,” Erwin said. “I’m glad we made it here and were undefeated in district. I wish I could come back and play. They’re going to be so great when they get to their senior year.”