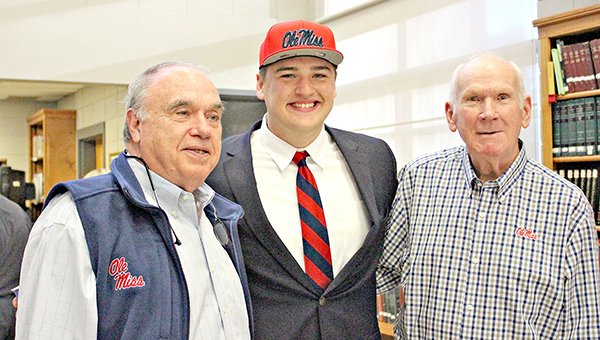 OXFORD — Ole Miss lost one of its football legends Monday, with the passing of Allen Brown, 76, following a lengthy illness.

Visitation will be from 10 a.m. to noon Saturday, Feb. 1, 2020, at the Family Life Center, at Jefferson Street United Methodist Church, 511 Jefferson Street in Natchez, with the service to immediately follow. Laird Funeral Home is in charge.

A Natchez native, Brown earned three letters at Ole Miss while playing for legendary coach Johnny Vaught and served as co-captain of the 1964 team. He also was the patriarch of an Ole Miss football family that spanned several generations.

Two of his sons also played at Ole Miss as Tim earned two letters as an offensive guard (1988-89) and was co-captain of the 1989 squad, while Burkes lettered twice as an offensive tackle (1991-92).

Allen Brown was a first-team All-America selection by the Associated Press, Time Magazine, and The Sporting News as a senior in 1964, rated f­irst-team All-Southeastern Conference in 1963 and 1964, and was chosen to the Sophomore All-SEC team in 1962.

Although plagued by numerous injuries during his collegiate career, Brown help­ed lead the Rebels to a 22-6-3 overall record, two Sugar Bowls and one Bluebonnet Bowl. He was a member of the 1962 team that compiled a perfect 10-0 record, won the SEC title and also earned a share of the National Championship as the Billingsley, Litkenhous and Sagarin rating systems selected the Rebels No. 1. The 1963 squad also won the SEC crown and Ole Miss finished ranked in the national polls all three years Brown played for the Rebels.

During his three-year varsity career, Brown was more than a blocking tight end as he caught 51 passes for 584 yards and three touchdowns, averaging 11.5 yards per reception. He led the team in receptions and pass receiving yards (16 for 221) during his 1963 junior season.

A 6-foot-4, 225 pound two-way player who also saw extensive action as a defensive end, Brown received the Leadership Award from the Birmingham Ole Miss Alumni Chapter. Following his career at Ole Miss, he was selected to participat­e in the 1964 Blue-Gray Game, the 1965 Chicago All-Star game and the 1965 Senior Bowl.

Selected in the third round (38th overall) of the 1965 National Football League Draft by the Green Bay Packers and in the third round of the 1965 American Football League Draft by the San Diego Chargers, Brown played two years (1966-67) for Coach Vince Lombardi’s Green Bay Packers and was part of helping the team win Super Bowls I and II.

His pro career was cut short due to a series of injuries. During his brief career with Green Bay, Brown saw action in 19 NFL games, catching three passes for 43 yards (14.3 yards per reception) and returning one kickoff for 13 yards. His roommate with the Packers was center Bill Curry, who would later coach at Kentucky, Alabama and Georgia State.

Playing at Natchez High School, Brown rated first-team All-Big Eight Conference honors his senior season and was second-team All-Big Eight as a junior. He earned three prep letters in football, three in basketball, two in baseball and two in track.

When it came to his dedication to community service, Allen Brown led by example and gave generously of his time to the Grace United Methodist Church Men’s Club, Natchez Children’s Home, United Way, National Football Foundation and Hall of Fame, American Cancer Society, Natchez Regional Medical Center, Joe Fortunato Golf Tournament and many other worthy causes. He was also a member of the Ole Miss Alumni Association and the Ole Miss “M” Club.