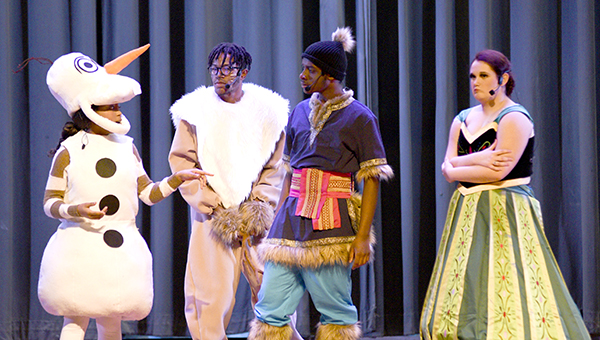 When Walt Disney Pictures released “Frozen” in 2013, it became an immediate hit.

In 2018, the animated musical became a Broadway musical production and beginning Friday, students at Vicksburg High School will take to the stage with their production of “Frozen Jr.”

“This is one of my favorite Disney movies,” Vicksburg High’s choral director Angela Chapin said.

“I always thought I’d be retired before the performance rights were released, but when I received an email during one of our ‘Lion King’ shows last year that the ‘Jr’. version (one that requires a recorded accompaniment) would be released in time for our musical dates this year, there was no turning back,” Chapin said.

The production follows the movie fairly closely, Chapin said, with all the familiar songs, plus a few new ones.

Vicksburg’s production is comprised of nearly 50 students who are either in the production or who make up part of the backstage crew.

May Spangler has the role of Anna in the production, and Elsa, who sings the now iconic, “Let It Go,” will be performed by Abigail Hughes.

Other lead roles include Kameren Batty as Hans, Randy Barnes as Kristoff, Joshua Floyd as Sven, Kristoff’s reindeer, and Ariah Pendleton as Olaf, the comical and endearing snowman.

Chapin said rehearsals have been held three nights each week since November.

“I am so blessed to work with some of the most amazing students in our district,” Chapin said. “They are always excited to get started and often rehearse on their own.”

Chapin also acknowledged the efforts of her fellow teachers and those working behind the scenes.

“This is not a one-man job. It takes people building sets, making costumes, running rehearsals, lights, sound, and so much more. The students help in all aspects of the show under teacher guidance and supervision,” Chapin said. “I also have awesome coworkers.”

In addition to Friday’s opening performance, the musical will also be offered on Saturday.

Both performances will begin at 7 p.m. at Vicksburg High School, 3710 Drummond St. Since the school is undergoing construction, guests will need to enter through the Confederate Avenue side of the school building.

Tickets are $10 and $5 for ages 10 and younger and are available at the door or from a cast or crew member. Concessions will also be available.

In addition to the performance, a contest will be held for those who come dressed as their favorite “Frozen” character.