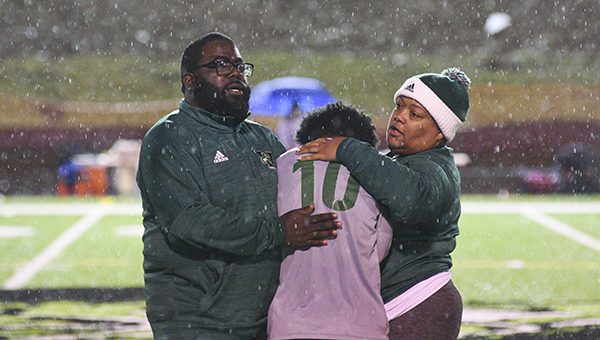 A cold, drenching rain brought a certain level of misery to Tuesday’s girls’ soccer playoff game between Vicksburg High and Neshoba Central. The outcome did nothing to brighten the mood for the home team.

Ella Elliot, Makaylin Alex and Rose Coats scored two goals apiece, and Neshoba Central blitzed past Vicksburg 7-0 in the first round of the MHSAA Class 5A playoffs at Memorial Stadium.

Abbie Cumberland also scored for Neshoba Central (13-6), which took 24 shots in 50 minutes — the game was shortened by the mercy rule — and advanced to face Saltillo in the second round on Saturday.

Vicksburg (11-4-1) had a terrific season end in horrific fashion. It had some scoring chances, with four shots on goal and three corner kicks in the first half, but a lackluster effort on defense allowed Neshoba to pull away early.

Most of the Rockets’ shots were on one-on-one chances with the keeper, and taken from inside the box. In addition to the seven goals they did score, the Rockets hit the post four times.

Coats and Alex scored goals in the fifth and sixth minutes, respectively, to get Neshoba off and running, and by halftime the score was 5-0. Two quick goals by Coats and Elliot in the 47th and 49th minutes of the second half ended it.

“Just breaking down, with no communication,” Williams said in assessing her team’s defensive effort. “It was bad.”