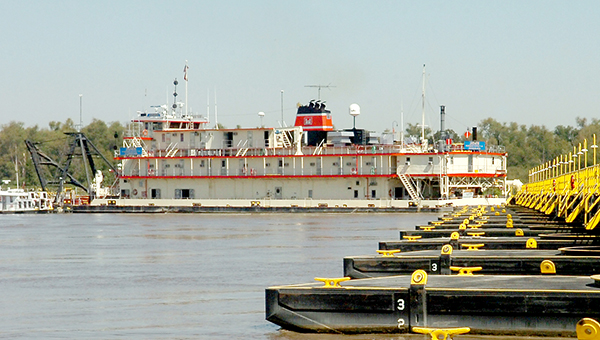 The U.S. Army Corp of Engineers' dredge Jadwin is seen in this Vicksburg Post file photograph.

The dredge Jadwin, operated by the U.S. Army Corps of Engineers Vicksburg District, was damaged Saturday when it collided with a westbound tow in the Intracoastal Waterway, about 9 miles west of Morgan City, La.

Port of Morgan City Director Raymond “Mac” Wade said the Jadwin was working in the area at the time of the wreck. No one was reported injured.

According to information from the Vicksburg District, the Jadwin sustained damages from the collision, including a 20-foot dent along its discharge pipeline. The Corps called the damage minor.

The dredge is expected to briefly dock in Morgan City later this week for necessary emergency repairs that were identified before the accident.

Lt. Michael Groff, senior investigating officer for the U.S. Coast Guard Marine Safety Unit in Morgan City, said the Jadwin collided with a six-barge tow at the Wax Lake Outlet where it crosses the Intercoastal Waterway about 11 a.m. Saturday.

He said the dredge was working at the intersection of Wax Lake and the waterway and had been working in the area for about one week. He did not know if the Jadwin was dredging at the time of the collision.

Groff declined to give further information, citing the ongoing investigation into the collision.

Built at the Marietta Manufacturing Co., in Point Pleasant, W.Va., the Jadwin was launched Oct. 30, 1933, and named for Lt. Gen. Edgar Jadwin, who was chief of engineers during the 1927 flood.

It performs dredging duties on the Mississippi River and ports along the river during the traditional low water season from July to December.