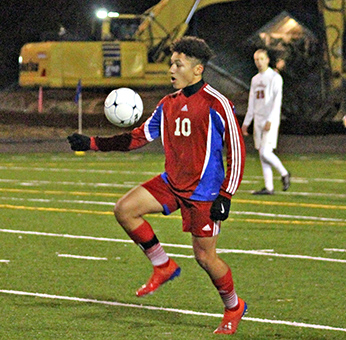 For the past eight years, Warren Central’s soccer teams never knew exactly when and where their season might end.

As a perennial playoff team, even if they were an underdog there was always the opportunity for another game if things went well. The end was swift and sudden.
Not this season.

On Friday night, as the clock ticked down on their games against Florence, both the girls’ and boys’ teams knew the end was inevitable. The Lady Vikes had been eliminated from playoff contention a week earlier. The Vikings still held out a slim hope that was dashed 18 hours later, when Clinton beat Murrah 4-1 on Saturday to officially clinch the last spot from Region 4-6A in the MHSAA Class 6A boys playoffs.

“You don’t believe it until it’s actually here. You don’t realize it. It just happens, and it’s like, ‘Wow, this is my last game,’” goal keeper Anna Hoben said after the Lady Vikes lost 1-0 to Florence. “Some of these girls I’ve played 14 years with and some of them are hanging them up, and some I’ll see on the field against another. It’s an eye-opener that life’s really starting to happen. Friends that you’ve played with for so long are moving on, and you’re going your way, and it’s really hard.”

Although they both missed the playoffs, neither Warren Central team had a bad season. The Lady Vikes finished with an 11-9 record. The boys’ team was 15-5 and ranked No. 11 in Mississippi by MaxPreps.com.

The main obstacle was a difficult region where they both wound up as the odd team out in a three-way battle for two playoff spots.

In Region 4-6A, the Vikings lost out to No. 2 Madison Central (16-0-2) and No. 6 Clinton (11-5-1). Despite holding their own with both — they split the season series with Clinton and lost 2-0 and 1-0 to Madison Central — the Vikings finished third in the region because of goal differential tiebreakers.

The Vikings finished the season with a 2-1 win over No. 9 Florence on Friday.

“It does sting a lot, because this is one of the better teams I’ve had in a while and we don’t even make it to the playoffs this year,” Warren Central coach Greg Head said. “I knew our work was cut out for us, and these kids worked hard to get to that point so we could compete. It was not an easy bracket.”

Head added that there is talk of the MHSAA expanding the Class 6A playoffs from 16 to 24 teams next season, to allow three instead of two teams in each region. He also said that’s little consolation for this year’s squad.

“Next year I think they are looking at going to a three-team playoff bracket like softball and baseball, because they have two or three divisions in the state that are just full of good teams,” Head said. “That’s next year. That isn’t going to help us this year. This is one of the better teams we’ve had in a while. We went toe to toe with Madison Central for most of the game. It just works out this way. I hate it for the boys.”

The bright side for the Vikings is that they aren’t losing much in terms of talent. There are five seniors on the roster, three of them starters. The list includes leading scorer DeQuarian Buck (23 goals) and midfielder Jagger Weekly (three goals, five assists), but plenty of young players are behind them.

“We’re missing two of our defenders and (Buck) up top, but we should still be looking pretty good next year,” Head said. “We’ve got to replace three good players, and that’s always a task, but we’ve got a lot of young guys coming up. As long as we’re building our program up, we’re going to be good for the next two or three years.”

The outlook for the Lady Vikes is not as bright. Hoben, who has signed with Mississippi Gulf Coast Community College, was one of nine senior starters. Sophomore Natalie Greer and freshman Bree Butler will be the only returning starters, and the bench behind them was thin.

The Lady Vikes finished with a winning record for the third season in a row, despite missing the playoffs for the first time since 2011. Extending that streak to a fourth year, Head said, will be a challenge.

“The girls had a good team. We played with nine seniors, and then a sophomore and a freshman,” Head said. “Next year, the next couple of years, are going to be rebuilding years for the girls because we just don’t have the numbers there. The girls did good. We just didn’t have any depth.”