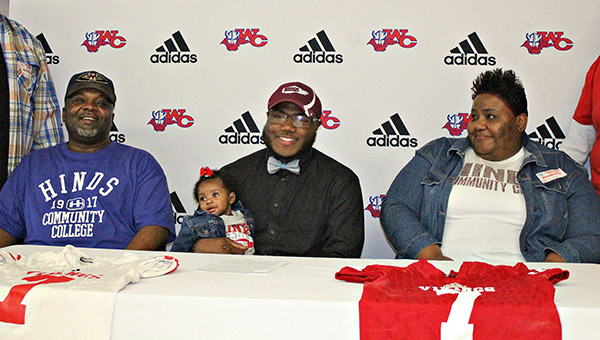 Warren Central linebacker Malik Sims, center, holds his niece Mikenly Horton after announcing Tuesday that he has committed to play at Hinds Community College. Sitting alongside him are his parents Michael and Annie Sims. (Ernest Bowker/The Vicksburg Post)

Malik Sims is a thick-muscled, 230-pound linebacker who happily embraces his reputation as a fearsome hitter and physical football player.

In a ceremony in the school’s library, surrounded by family, coaches, friends and teammates, the Warren Central senior announced that he has committed to play at Hinds Community College. National signing day is not until Feb. 5, but Sims said he wanted to have an early ceremony as a birthday present for his mother Annie, who turned 50 on Tuesday.

“It’s my mama’s birthday today, so I told her I was going to announce on her birthday. She’s happy,” Malik Sims said.

“It was a dream come true,” she said. “I’m very excited that he can further his career at what he loves to do, to go to the next level and also get an education while he’s doing what he loves.”

Sims averaged 76 tackles over the past three seasons for Warren Central, and moved into the starting lineup during his sophomore year in 2017. He had 82 tackles, 10 tackles for loss, two sacks and one interception in 2019, when he was The Vicksburg Post’s Defensive Player of the Year for Warren County.

He chose Hinds over other junior college offers from Holmes and Coahoma. He said a combination of a good fit and some familiar faces led to his decision.

One former Warren Central teammate, Corey Wilson, Jr., transferred to Hinds from Southern Miss in December and another, defensive lineman Vertez Shorter, will be a sophomore next season. Two current teammates, wide receiver Demond Patton and offensive lineman Chris Winston, plan to sign with the Eagles on signing day next week.

Sims’ verbal commitment is non-binding, but there were no indications he would change his mind before making it official next Wednesday.

“I feel like they showed me more love, and they’re going to get you out of there. A lot of Warren Central players went there and got out of there. I feel like I can go out there and turn the whole system around,” Sims said of Hinds. “They’ve got a lot of things rolling. They’ve got my boy Corey (Wilson) and all of those boys over there.”

After reading a brief statement thanking his coaches, family and teammates, Sims smiled broadly and posed for a few pictures. He’ll go through it all again on signing day, but said he was already looking forward to getting on the field.

“I’m ready to play now,” Sims said with a grin.