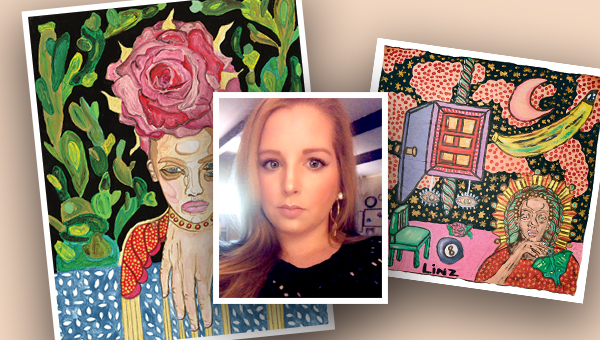 Vicksburg native Lindsay Carraway's art is currently on display at the Mississippi’s Arts and Entertainment Experience in Meridian.

Things were not making sense.

College had become a struggle, and the voices and images Lindsay Carraway was hearing and seeing were frightening.

“My mind was all over the place. It was tough,” the former Vicksburg resident said.

At 23, Carraway had been diagnosed with depression, and a year later bipolar disorder. But it wasn’t until she sought out the help of a Hattiesburg health care provider a couple of years later that she found out what was really going on in her brain. She was suffering from schizophrenia.

“I think I felt like all the pieces to the puzzle started to fit and make sense,” Carraway said. “Once it had a name, we could finally treat it correctly and then it wasn’t like walking through jello anymore. It was clear.”

One in five adults experience mental health conditions. To help bring awareness as well as to challenge the negative stereotyping of those who suffer, an art exhibition featuring 50 of Carraway’s pieces is being shown at the Mississippi Arts and Entertainment Experience in Meridian.

Entitled “Heal the Knife that Cuts the Wound,” MAX museum director of marketing Jerome Trahan said, “Visitors will become immersed in her world — the shapes, colors, and themes of women, family, and empowerment.”

“The exhibition and the stories shared are also a useful opportunity to highlight the issue of mental health and to start conversations,” Trahan said.

“It’s about choosing to be proactive in one’s own mental health care,” Carraway said. “And cutting out the bad and letting out snakes.”

Carraway, a graduate of Warren Central High School, said she has always been interested in art

“I had a teacher in junior high, Mrs. Watkins, and teachers in high school, Mrs. Mitchell and Mr. Jolly, who all really pushed me, and I think saw potential and just put up with me,” Carraway said.

Mitchell had also served as a mentor, Carraway said.

“She (Mitchell) helped me get into college and was great at teaching us about keeping journals. I now keep at least 3 at all times,” she said.

Before returning to Mississippi, Carraway studied at Pratt Institute in Brooklyn, New York and at the Savannah College of Art and Design in Savannah, Ga., where she was an industrial and furniture design major.

While creating these technical drawings, Carraway said, it became apparent she could express herself using techniques she wasn’t trained in like painting and collage making.

“I’m a very vivid dreamer. I almost always remember everything and every detail,” Carraway said, which she then expresses in her artwork. “It’s a way to focus or use as a tool to find some kind of explanation of what’s going on in my mind and dreams.

“Dreams tell us the story that we already know, but just forgot. Painting them reminds me, so I don’t forget again,” Carraway said. “ The other night I had a dream I peeled a rainbow and took the colors and made them into origami.”

Carraway credits Stacey Wilson, the curator for exhibitions at Mississippi Arts and Entertainment Experience, for having the opportunity to showcase her art.

“I stalked Stacey and was like hey pick me, look at me, pick me, and luckily she did,” Carraway said. “Which is the most amazing thing ever.”

Carraway’s exhibition opened on Jan. 25 and will run through May 3.

“I’m so blessed and excited and think it’s just the most beautiful thing ever to have people see you,” Carraway said. “And to get to share who you are and what you do and parts of yourself — is special.”