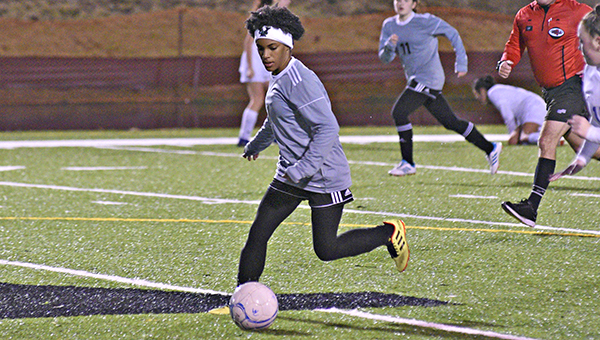 Vicksburg High's McKenna Elder (1) controls the ball against Neshoba Central on Tuesday. Vicksburg won the Region 4-5A championship and finished 11-4-1 this season, but lost 7-0 to Neshoba in the first round of the MHSAA Class 5A playoffs. (Courtland Wells/The Vicksburg Post)

By any measure, Tuesday evening was probably the worst night of the season for Vicksburg High’s girls’ soccer team.

In a cold rain that persisted through much of the game, the Missy Gators lost 7-0 to Neshoba Central in the first round of the MHSAA Class 5A playoffs. The game was shortened to 50 minutes, rather than the normal 80, by the mercy rule

The one saving grace was that, while this season ended with a thud, there is plenty of hope for a bright future in its aftermath.

There are only three seniors on this year’s roster, and two juniors behind them. The bulk of the lineup is comprised of eighth-graders with plenty of soccer ahead of them. They also have a shot of confidence thanks to the program’s best season in five years, which should provide a nice bounce heading into offseason workouts.

“It was a good season. I know it’s going to get better,” Williams said. “I hate it for the few that I have that played their hearts out. We had some that were just standing around looking. I hate it for those that gave their best effort. We’ll just get ready for summer camps and 7-v-7’s this summer, and try to get there next year.”

The Missy Gators won the Region 4-5A championship this season, their first title since 2017, and finished with an 11-4-1 record. The win total nearly matched the 12 games they’d won in the past four seasons combined.

Vicksburg should also, once again, have an easy path to the playoffs. It outscored region opponents Callaway, Jim Hill and Provine 41-2 in five games this season. Provine forfeited the second meeting between the teams. None of the other three teams in the region are considered soccer powers.

With a host of talented players returning and a good season under their belt, however, Williams bristled at the suggestion that the Missy Gators were merely the best team in a weak region. She said this season was a big step forward for the program, and the first step toward returning the program to contender status on a state level.

“I don’t like comments like we’re not a better team, because we are, obviously,” Williams said. “I don’t like being categorized as such because we have JPS schools in our district. It’s not that we play all the JPS schools and it’s, ‘Hey, you’re the best of the trash,’ kind of thing, because that’s not the case at all. We do have the skill. We do have the potential to be phenomenal — boys and girls.”