Faith, homilies and a connection to NASCAR 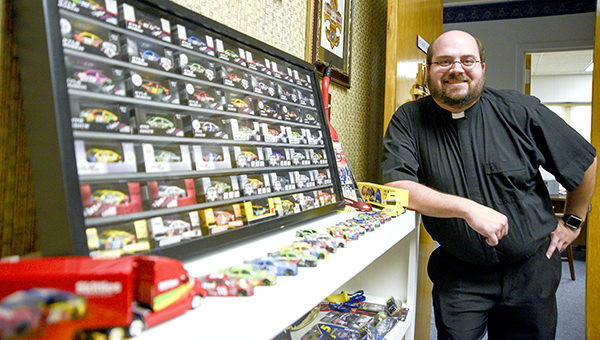 It is no understatement that NASCAR is one of the most-watched and followed sports in the United States.

Many follow the sport and its drivers with a religious intensity that rivals any other American sport. And for the pastor of St. Paul Catholic Church certain elements of the sport provide a close tie-in with how one can follow their faith.

A NASCAR fan since he was 13, the Rev. Rusty Vincent can be found every Sunday afternoon watching the races. If he has an event, he records the race so he can watch it later.

He likes to refer to NASCAR periodically in his Sunday homilies to help parishioners better understand the message tied to the gospel reading for the day.

“I find it fits pretty well, overall,” he said, “Especially if I go just beyond the racing.  The racing is St. Paul always talking about finishing the race toward heaven, so finishing the race and winning is always a good analogy there.

“It’s just the nuance of NASCAR; the work they put into the cars, the kind of skill it takes to drive the cars, and all those things are refining abilities that I preach about. When I talk about virtue it’s the same as trying to refine your driving ability and being able to make adjustments in the middle of the race. That is something we have to do in life, too, to be able to adjust to changing things that happen.”

Vicent’s interest in NASCAR was born when he watched his first race.

“That was ’98. That was the year Dale Earnhardt won his first Daytona 500, so it was a big year, and I was kind of hooked since then,” he said. “The reason I watched it is because the first race of the season is in February after the Super Bowl, so that weekend, there’s nothing else on Sundays after that.

Football ended and I’m a sports fan, I wanted to watch something, so I saw the race was on and I watched the race. It was the intensity of the race; it wasn’t just Earnhardt winning, but how competitive they were and how intense the driving was, he said.

“They were right on top of each other, they were wrecking at times because they were going for the win, just the whole thing about the race really drew me in, and there was a clear-cut winner.”

In his early years as a fan, Vincent’s favorite driver was “Rusty Wallace because he was actually the first athlete of any sort who had the same name I did. I watched football, basketball, baseball, and it was often you saw players named Rusty, but they weren’t big stars like Rusty Wallace was.”

After Wallace retired, he picked a new favorite — Kyle Busch. And his enthusiasm for Busch goes beyond just rooting for him every Sunday afternoon. Walk in Vincent’s office and one of the first things that hits someone is a row of yellow race cars; models of the cars Busch has driven during his seven years in NASCAR.

The collection, he said, began about 4-5 years ago.

“I am a big Kyle Busch fan,” he said. “I started getting the cars you saw in the store; some of the little ones, but from there I went on and got some of the professional ones — the large ones like for professional collectors. Some of them were autographed and it kind of exploded from there. All the different types.”

The collection is also a tribute to his favorite candy, M&Ms.

“My main focus as a collector is I wanted one car for every year Kyle Busch has driven. And then I wanted to get any of the different M&M ones he’s driven; all the different flavors and the paint scheme for all of them I just wanted each of the M&M ones,” he said. “One of Kyle Busch’s sponsors is Mars Candy, and he drives sometimes with Snickers and others (on the car), but his main one is M&Ms, and I do love M&Ms.”

Vincent said he likes Busch “because of his competitiveness, his ability just to drive anywhere. He’s a winner; he won the championship this year and I could relate with his personality, at times kind of being angry, at times very happy and he’s a good family man; I like that, too.”

NASCAR is not the only analogy Vincent uses. Other sports also play into the homilies.

A self-described “big LSU fan and a big Saints fan,” he said sports analogies work well because most people follow some sort of sport or team and they can relate to something he says.

“I find sports references help a lot of people get drawn into it, all ages,” he said. “Our high schoolers play sports, so when I make a reference to when I played sports, they can relate.”

But the NASCAR analogies seem to be the favorite.

“They start a race with a prayer, and you can tell these guys are very open about their faith; a lot of them will reference it after the race during interviews,” he said.

“There’s a driver in the truck series, Johnny Sauter, whose Catholic, and if he wins, like on a Friday, he will thank the Immaculate Heart of Mary and the Sacred Heart of Jesus, so you can just sense the drivers who have faith and they’re not afraid of showing it. Even at the track, they’re not afraid to show it.”

But it is the race for a more everlasting goal Vincent is most focused.

“Overall, our goal is to get to heaven and I’m always pushing in my homilies how until we’re there we’re always working toward it and seeking it,” Vincent said.

God, he said, gave people the grace to seek heaven by Jesus dying on the cross.

NASCAR has the line to cross, he said, and a driver reaching the finish line in a race wants to drive as fast as they can, but if they go too fast, they lose control.

“In NASCAR, you can’t go beyond what the track’s going to allow you to do. With God, we can’t beyond what God’s calling us. We can, but it leads us off the track, so we stay on that.” 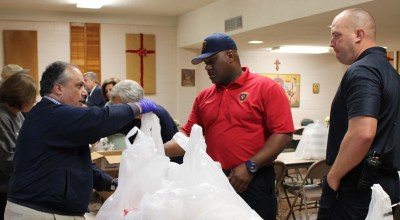