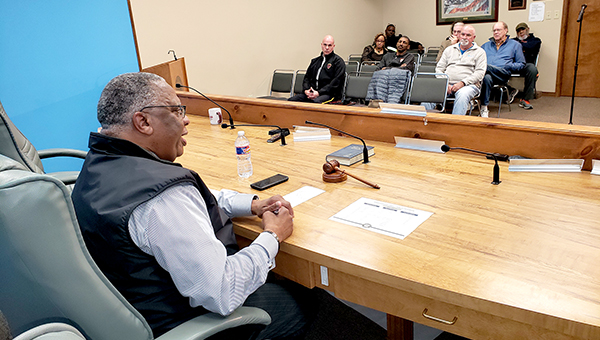 The meeting was primarily intended to be a question-and-answer session, but several of the questions turned into discussions about alleviating some of the city’s issues.

In response to comments from one resident about the lack of business in the Kings community and old Vicksburg, Flaggs criticized people who complain about a lack of retail in the city and then go to areas like Jackson to shop.

“You know the way to get retail to come back? You want chains to come? Create a demand for it,” he said. “You know how to do that? Serve and shop here in Vicksburg.

“When you come and brag about what you got at the Renaissance (in Jackson), that didn’t pay any bills in Vicksburg, that didn’t help any policeman, any firefighter, any city employee,” he said. “The online shopping I know is convenient for a lot of folks, but online shopping has devastated retail business.”

Flaggs said people have to get back to a tradition of shopping at the local stores.

“Go downtown; a watch (bought) downtown will keep the same time as a watch from Lee Michael’s in Jackson, and it’s probably not going to cost as much,” he said.

He hopes the new owners of the outlet mall bring some ideas that will help boost retail activity in the city.

“We’re getting the road (the South Frontage Road extension); something I never thought I’d see. We’ll get that traffic off I-20 and into the outlet mall,” Flaggs said.

“We had an opportunity to get some franchises here and the local people ran them away, but I think they’re coming back,” he said. “I think Pablo (Diaz) and the chamber are beginning to get that back.”

He said there are plans to attract more retail to the Vicksburg Mall.

“I hope I’ve encouraged people to shop here first, eat here first and then go,” Flaggs said. “I’ve learned there are more people coming from out of town to eat in Vicksburg than the people who live here.  Shop local first; that’s what I do.

“Shop here first, and then if you can’t find it then I can see you going out. But don’t come here and brag about what you bought in Jackson.”

Flaggs said the city needs to do a better job advertising the city.

“We need signs to better advertise the city,” he said. “Most of the city’s money is coming from an 80-mile radius; that’s your regular customers. That’s what we have to do, promote our City.”

Is annexation a possibility?

Flaggs did not discuss annexation directly, but said, “Write this down: In the next five years, the taxes in the county will be just as high or higher than the city taxes — because we haven’t raised taxes.

“When you get to that level of tax, it won’t make any difference if you’re in the city or the county, and you’ll get a lot of folks wanting these city services,” he said.

Flaggs believes the new board of supervisors “come with an open mind to a lot more collaboration and working together, but I made a pact with them that ‘dictator Flaggs’ was not going to suggest anything to them, they suggest it to me and we’ll pass it.

“‘When ‘dictator Flaggs’ says it’s good for the county, they shoot at me.’”

The city has a policy it follows for clearing lots and dilapidated buildings, Flaggs said, but added, “People have to take responsibility for their own community. You don’t know how often I get cussed out for telling somebody to cut their grass because it’s too high or give them a citation.

“People just don’t want to abide by the law.”

“The citizens have got to help us; take responsibility. You’d be surprised at the calls we get from people wanting their next-door neighbor to clean up something. They can’t get into their own house because of their neighbor.”

Concerning the vacant buildings on Clay Street, Flaggs said the Mississippi Municipal League is looking at ways cities can assess fines on people who leave their property.

“We can’t go on commercial property to inspect it. Guess what happens, the roof falls in first,” he said. “I think the Legislature’s beginning to give us more tools in terms of being able to assess costs.”