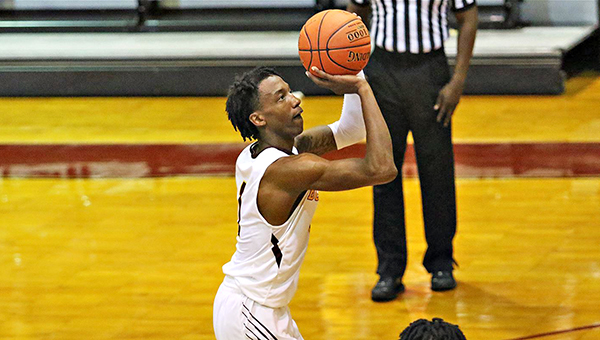 UTICA — Earlier this week, Hinds Community College’s Dontrell McQuarter was named the best player in Mississippi. On Wednesday, he became the best in the country.

McQuarter, a sophomore forward from Baton Rouge, was named the national men’s basketball Player of the Week by the National Junior College Athletic Association.

The award comes on the heels of his being named the Mississippi Association of Community and Junior Colleges state player of the week.

McQuarter scored 25 points in an 80-79 overtime loss against Copiah-Lincoln on Jan. 21. He followed that by posting a double-double, with 14 points and 10 rebounds, in a 71-54 victory over East Central Community College on Jan. 23.

In total, McQuarter played 66 minutes, scored 39 points, tallied 19 rebounds, five assists, two steals, and one block for Hinds last week. He went 15-for-23 (65.2 percent) from the field in the two games.

For the season, McQuarter is Hinds’ leading scorer with 15.2 points per game.

“Dontrell optimizes the type of person and player we try to recruit and build at Hinds,” Hinds head coach Yusef Fitzgerald said in a release. “He strives for excellence both in the classroom and on the court, and he puts in the time that is necessary to achieve that excellence. I am so proud of him. If I had a daughter, I would hope she would end up with someone like Dontrell.”

Hinds (9-5, 4-3 MACJC) plays at home on Thursday at 7:30 p.m. against Southwest Mississippi, and will go on the road Monday to play Jones College.