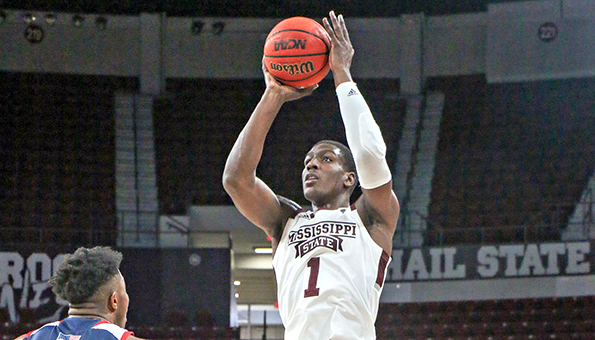 Mississippi State’s Reggie Perry (1) shoots a jumper earlier this season. Perry has scored 22 or more points in each of four consecutive SEC victories for the Bulldogs, who host Tennessee on Saturday. (Walter Frazier/For The Vicksburg Post)

Mississippi State is a couple of baskets away from being one of the hottest teams in the country. It’ll be happy to settle for digging out of a hole and into the middle of a crowded pack in the Southeastern Conference, with a chance to keep moving up.

The Bulldogs (13-7, 4-3 SEC) have won four consecutive conference games since losing their first three, and four of their last five overall.

They’ve only lost twice in their last six games, both by one point on the road at LSU and Oklahoma.

In their last outing, Mississippi State rallied from 16 points down to beat Florida 78-71 on Tuesday.

“Great for our team to get a tough road win. We lost the last two road games by one,” Mississippi State coach Ben Howland said after beating Florida. “We had the lead in the LSU game, up nine, and gave it up down the stretch. (Tuesday) and in Oklahoma on Saturday, we fell behind big in both of those games. We’ve got to stop making this a habit, but I’m so proud of our guys the way they fought back from the huge deficit in the first half to get it to 10.”

Perry had a career-high 27 points and eight rebounds against Florida, and has scored 23, 22, 26 and 27 points during the SEC winning streak. He also had 13 points and 15 rebounds in a one-point road loss at No. 22 LSU in the outing before the streak started.

“His 3 shot (Tuesda) was really going,” Howland said. “You can see he’s going to be a really good 3-point shooter at the next level. … I’m just so happy for how he’s playing for us.”

The surge has brought the Bulldogs from the bottom of the SEC standings into the upper third. They’re one of six teams tied for fourth place, a game behind Auburn for third and three behind first-place LSU.

“I think, arguably, right now they’re the hottest team in the league. They can score. When they’re scoring in the 80s, they win. They can get going and do a lot of different things,” Tennessee coach Rick Barnes said of the Bulldogs.

Among those tied with Mississippi State is Tennessee (12-8, 4-3), which visits Starkville on Saturday afternoon and has hit a rough patch In the past week.

The Volunteers come into Saturday’s game on a two-game losing streak, with close losses on the road at No. 3 Kansas and at home against Texas A&M.

Tennessee has not lost three consecutive games since late in the 2016-17 season. It has also won nine games in a row over teams from the state of Mississippi.