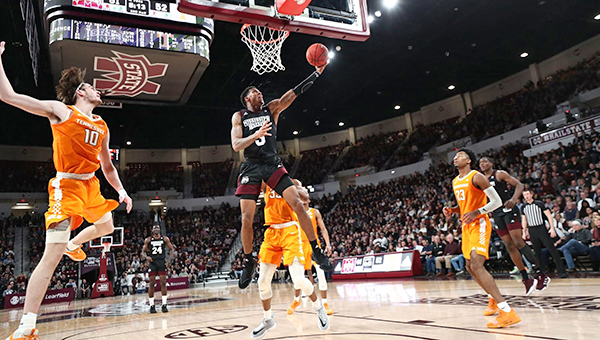 STARKVILLE (AP) — Reggie Perry had 24 points with 12 rebounds and D.J. Stewart had a career-high 20 points to lead Mississippi State to an 86-73 victory over Tennessee on Saturday.

Perry’s output marked the seventh time in the last 10 games he has scored at least 20 points. The sophomore forward also collected his 12th double-double of the season and 21st of his career. Stewart was 6 of 9 shooting and made 4 of 5 shots from 3-point distance.

Uros Plavsic and Santiago Vescovi each had 16 points for Tennessee (12-9, 4-4), which has dropped three straight games. Jalen Johnson added 13 for the Volunteers and Jordan Bowden had 12.

“Obviously a really, really big win for us against a really good program,” Mississippi State coach Ben Howland said. “They did a good job coming out early and playing inside-out, and got (Abdul) Ado in foul trouble. Our defense was not nearly as good with Ado out but it was our defense in the second half. We played much better defensively in the second half and that gave us more opportunities in transition.”

Tennessee shot 47 percent from the floor and made 10 of 22 from 3-point territory. The Volunteers had just six turnovers and made 9 of 13 at the free throw line.

“Really dominating performance by Mississippi State in the second half,” said Tennessee coach Rick Barnes. “I’m really proud of our guys the way we started the game because we had to change things in the lineup. But I was proud of the way the young guys responded. They just dominated us inside, though, and we had no answer for it.”

Stevenson finished with 14 points and 10 rebounds. Leonard Harper-Baker had a career-high 16 rebounds, plus eight points and 10 assists.

Charlotte’s Drew Edwards hit a 3-pointer from the baseline with 3.9 seconds left to even the score at 66 and send the game to overtime. Edwards had 16 points and nine rebounds for the 49ers (12-9, 6-4). Jordan Shepherd added 14 points and eight assists. Malik Martin had 13 points.

Southern Miss faces Marshall on the road on Thursday.

LSU 73, Ole Miss 63
Javonte Smart scored 13 of his season-high 21 points in the last 16 minutes, and No. 22 LSU extended its winning streak to 10 games with a victory over struggling Ole Miss on Saturday.

Marlon Tayor had 13 points and 11 rebounds and freshman Trnedon Watford scored 13 points for LSU (17-4, 8-0 SEC), which is off to its best start in conference play in 39 years.

Devontae Shuler scored a career-high 28 for Ole Miss (10-11, 1-7), which has lost two straight and eight of its last nine. Khadin Sy scored nine of his 11 points in the second half, but was one of just two Rebels with as many as 10 points.

The Rebels shot 35.6 percent as a team. They host South Carolina on Wednesday.

“They got us in every facet early,” Ole Miss coach Kermit Davis said. “Our team is a work in progress. We’re disappointed but we’re not discouraged. Kind of a reset year and we’ll get it fixed. I really like what LSU is doing and they’ll win a lot of games.”