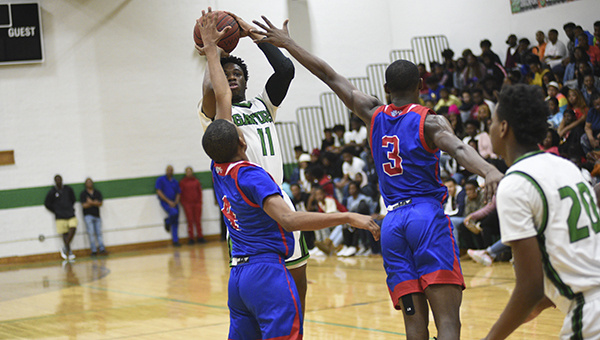 The Vicksburg Gators were doing just fine on the road. Even so, they were awfully glad to finally be back home.

Taylon Smith made four 3-pointers and scored all 14 of his points in the first quarter, Cameron Butler added 16 points, and the Gators made short work of Warren Central in an 82-49 victory Saturday afternoon.

It was Vicksburg’s sixth consecutive victory, and its first game at home in three weeks. They had played three true road games, two on neutral courts, and another on Friday that was moved to Vicksburg Junior High because of a schedule conflict with a school play.

“It’s been a while since we’ve been home,” Vicksburg coach Kelvin Carter said. “We’ve been on the road a while. We shoot well in here. We’re blending at the right time and making a great adjustment at the right time heading into the district tournament.”

Warren Central (11-11), meanwhile, lost its third in a row and for the seventh time in eight games. The Vikings fell behind by 15 points at the end of the first quarter, trailed by 28 at halftime, and were never really in it after the opening moments.

“You can dig out of the hole, but you’ve just got to play some defense and that’s not what we’re doing right now. We’re not rebounding. I think, for the most part, we’re sitting around feeling sorry for ourselves because of this and because of that. That ain’t going to get it done,” Warren Central coach Bruce Robinson said. “We still have two more ballgames left and we have to get ready to play those, and then you still have the district tournament. That’s all that matters. We’re just going to keep it positive and keep working on our deficiencies and our strengths.”

Carter said part of the reason for the Gators’ dominance was the absence of Warren Central forward Jabari Bowman. The Mississippi all-star was serving the second half of a two-game suspension after getting into an altercation in Tuesday’s 82-57 loss to Clinton.

Bowman, a 6-foot-6 senior forward, is averaging 17.3 points, 7.9 rebounds and 1.3 blocks per game. He is expected to return for Tuesday’s home game against Northwest Rankin.

Without Bowman providing a mismatch inside, the Gators (15-7) were able to overwhelm Warren Central with superior shooting and guard play.

Vicksburg made 12 3-pointers in the game. Smith and Butler were among seven VHS players who finished with at least seven points. Sean Hardy scored nine, Rickendrick Johnson and Datrick Anderson had eight, and Peytin Jackson and Jaden Williams scored seven each.

“It’s tough when they don’t have their big man,” Carter said. “When I looked up and didn’t see J.B., I just felt like defensively you can cover their guards. They’re going to score some points, but when you get rid of a 20-10 guy in the middle, it’s hard.”

Carter added that he was happy to see some bench players like Anderson and Johnson not only get playing time in the blowout, but to contribute. Anderson hit two 3-pointers in the second quarter to help the Gators take a 43-15 lead into halftime. Johnson scored all eight of his points in the fourth.

Carter said that while their stats on Saturday mostly padded a lopsided score, it might help more when they’re needed in the playoffs.

“When you’re getting a little productivity with a guy or two off the bench hitting a 3-pointer, that may give him some confidence and we may be able to use him when the game is tight. So everything is building,” Carter said.

Markaylon Carroway added 13 points and Landen Webb eight for Briarfield. The Rebels outscored PCA 19-9 in the second quarter to stretch an eight-point lead to double digits and take control of the game.