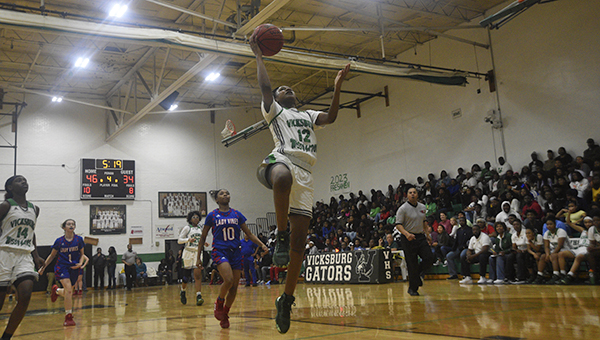 Vicksburg High's Yakia Burns (12) goes up for a shot against Warren Central on Saturday. Burns finished with 18 points and 16 rebounds to lead the Missy Gators to a 68-36 victory. (Courtland Wells/The Vicksburg Post)

Then they spent one quarter doing almost everything right and watching Warren Central’s upset bid become a distant memory.

Yakia Burns finished with 18 points and 16 rebounds, and Destini Sims scored 13 points as the Missy Gators ran away from Warren Central in the fourth quarter to win 68-36.

The score was 35-32 entering the final period, and then Vicksburg outscored the Lady Vikes 33-4 the rest of the way. Vicksburg was only 5-for-28 from 3-point range in the game, but four of its makes came in the fourth quarter.

“I think it was a combination of Warren Central’s team being worn down because I had so many girls, and we finally figured out a defense that would slow them down,” Vicksburg coach Troy Stewart said, adding that once a few shots started falling it became contagious. “Once you get something to go in, like a layup or two, or a free throw, the shots start to fall. We have been trying to get that done for a while. You have to start inside and work your way out.”

Warren Central (8-12) lost its eighth consecutive game as it limps toward the Region 4-6A tournament in 10 days. Leading scorer Aniya Sanders missed Saturday’s game with a sprained ankle, and coach Darein Hilliard said a young lineup simply ran out of gas after three quarters.

Tiarra Jones added eight points and 10 rebounds for Vicksburg (16-8), which bounced back from a 66-62 loss to Region 4-5A rival Provine on Friday. The Missy Gators have won five of their last six overall, and will wrap up the regular season next week with home games against Clinton on Tuesday and Brookhaven on Friday.

Stewart said facing those two opponents will provide a measuring stick heading into the Region 4-5A tournament that begins Feb. 10 at Callaway.

“We’ve got two extremely tough opponents this week, and I want to fare well against those two, see if we’re playing as well as we can and gel before the district tournament. The two games this week are both a challenge,” Stewart said. “We scheduled them to see where we were and where we line up with the state. I knew both of those teams would be high in the playoffs and rankings. We wanted to know exactly where we fall in.”