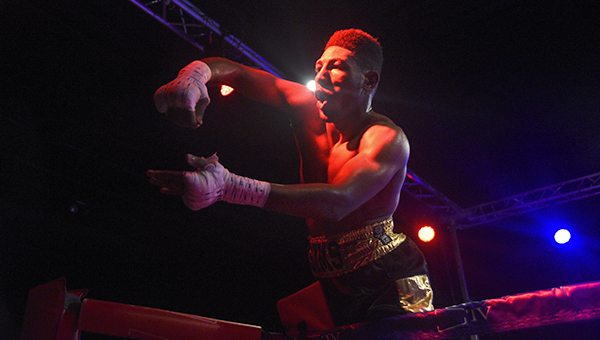 Two boxing championship belts were up for grabs Saturday night at Lady Luck Casino. Only one left the building with a new owner.

In the other main event, Rashid Akzhigitov and Willie Jake, Jr. fought to a controversial eight-round draw in their bout for the ABF Continental Americas heavyweight championship.

“I’m going to take a shower with it and everything. It’s my baby now,” Sims laughed, referring to the championship belt slung over his shoulder. “Most importantly, I’m going to give it to the gym. In actuality, they earned it. I’m not the easiest person to teach. I have to do things over and over and over, and it’s like dealing with your kids. My coaches earned this, and I have to thank them because without them I would be here.”

The two title matches headlined a nine-fight card at the Lady Luck Arena. A sellout crowd of about 750 people turned out for the event, and promoter Dr. Rashad N. Ali called it a success that should lead to more boxing in Vicksburg in the future. Saturday’s card was the first in the city since 2009.

Vicksburg mayor George Flaggs, Jr., Jackson mayor Chokwe Lumumba, and a number of other local dignitaries were among those in attendance.

“The event has turned out to be much more than I expected. I call this an overwhelming success. When you have the support of the mayor, the support of the city council, and the support of all of the power people of the city, then you can make for a great event. Outside of that, it can be dismal. But this has turned out to be a remarkable event,” Ali said. “Mayor Flaggs is looking forward to this being an annual event. The Saturday before the Super Bowl is when we put the show on, and we’re going to do it again. We want to come to Vicksburg. Vicksburg has showed us a lot of love. When they show you that kind of love, you can’t do anything but come back.”

Sims, who lives in Pearl and trains at the Pearl Boxing Club, won his first career championship in decisive fashion. He knocked Hinton down once in each of the three rounds. As Hinton lay on his back following the final knockdown, the referee immediately stopped the fight for a TKO.

Sims beat Hinton in a four-round decision last August, and said his goal this time was to earn a knockout.

“What my coach said was don’t let him get any confidence. The first fight we beat him on three days’ notice, and that’s in the back of his head. So he’s going to come out hard. So I came out and did exactly what he said,” Sims said.

Although Sims was all business leading up to the fight and in the ring, it didn’t take long for him to let his guard down afterward. Before receiving his championship belt he knelt in prayer with Hinton in the middle of the ring for about a minute.

Long afterward, he smiled and posed for pictures with family and friends he tried to avoid in the days and hours leading up to the fight.

“I was trying to stay back there, because I knew if I came out here everybody that was out here was out here to see me. My coaches were getting text messages and phone calls saying, ‘Tell Chop I said good luck’ and all of that. I didn’t want to let the crowd get to me and not perform as good as I should,” Sims said. “I was listening to T.D. Jakes before I came out and he said if God is with you, can’t nobody be against you. I really felt that.”

The other main event was not nearly as friendly, nor did it have a satisfying ending for either fighter.

Akzhigitov knocked Jake down twice in the first two rounds, and again in the seventh. Akzhigitov also punched Jake once when he was slipping to the canvas and another time on the top of the head when Jake was falling into the middle ropes. Either of the latter two offenses could have earned Akzhigitov a disqualification or a point deduction, but neither penalty was assessed.

Following the seventh-round knockdown — which came from a right hand to the head and was accompanied by a neat pirouette to the canvas in the corner — Jake was the beneficiary of a nearly 60-second break while being examined by the ringside doctor. He was allowed to continue.

After barely surviving the first round, and despite the two later knockdowns, Jake apparently did enough in the middle rounds to salvage a draw — and, for a moment, even win the title.
The result was initially announced as a split decision in Jake’s favor. A correction on one scorecard was misread, however, and it was changed to a draw a moment later. The scores on the three judges’ cards were not announced.

The decision did not sit well with Jake, who had about 60 seconds to parade around the ring with the championship belt before having to surrender it. Nor did it satisfy Akzhigitov, who was left wondering how he wound up with a draw in a fight he appeared to dominate.

“I don’t understand it. The doctor asked him and he was completely knocked out. I don’t know why they did like this,” said Akzhigitov, a native of Russia who is now based in Pensacola, Florida. “Of course I’m disappointed, because I won this fight. OK. It’s not finished. I’m ready to go the next time.”

Among the seven undercard fights, four ended in knockouts or TKO’s and three by decision:

• The opening bout of the night featured Wayne Atlow beating Anthony Molson by TKO 31 seconds into the second round.

• In the third bout, middleweight Michael Cook beat Anythony Walker by TKO at the 2:15 mark of the second round.

• Javonn Davis scored the biggest knockout of the night when Joshua Weems walked into his right hand 1:18 into the second round. Weems fell chin-first to the mat, his nose bloodied, and did not answer the referee’s 10-count to end the welterweight match.

• Meridian’s Tyi Edmonds stopped Rashad Jones at the 2:22 mark of the second round in their middleweight fight.

Edmonds fought the first round while chewing gum — his trainers forgot to give him his mouthpiece — but it hardly mattered. He was barely hit and knocked Jones down late in the first round, then scored another knockdown in the second round. At that point, Jones’ trainer waved a white towel to end the fight.

“I was disappointed. I wanted to get a clean knockout, not a TKO. I was getting warmed up and starting to have fun, and getting loose a little bit. The jitters went off of me right when I was ready to get started,” Edmonds said.

The 28-year-old Edmonds improved his record to 12-3. He said he used some self-analysis to get the best of Jones, who lost for the 25th time in 35 professional fights.

“In the first round, he was looking for something. So I’m the type of guy that I want to find the leaks in my own craft, so I stayed in the pocket to see what he saw. I wanted him to do it so I could fix that crack,” Edmonds said. “When he threw it, I could see he was looking for the right hand. I picked my left hand up and I wanted him to throw it so I could take it away from him. He stopped short and then I came up with the recipe.”

• Garreth Payton defeated Jayvonne Dafney in a four-round unanimous decision in their cruiserweight bout. Both fighters were making their pro debuts.

• Two of the best fights of the night both ended in six-round unanimous decisions.
Divante Jones defeated Ronald Rivas in a lightweight bout filled with exchanges that brought cheers from the crowd. Rivas seemed to win over a lot of fans by the end. Many booed the decision when Jones was announced as the winner.

Louis Hernandez outpointed Najik Lewis in a battle of two Mississippi middleweights, and contested in front of one of the sport’s legends.

Roy Jones, Jr., who won world championships in four weight classes from middleweight to heavyweight, trains and manages Hernandez and Akzhigitov and was in the corner for both. Jones got a special introduction before the Hernandez-Lewis match, and plenty of attention from fans and boxers alike. Many posed for photos after the event or even while Jones was settling onto a chair at ringside.

Even Lewis couldn’t help but be in awe of the former champ.

Following one exchange in the second round, Lewis did a quick foot shuffle reminiscent of Jones in his prime.

“(Hernandez) is pretty strong, so I just wanted to show him that I’m not scared of your power and I’m 100 percent into the fight,” said Lewis, who lives in Gulfport. “Roy used to do all the antics and stuff and when we went to that side I said, ‘Let me show him you don’t have a game plan for me.’”

In the third round, Lewis landed a body shot that brought a verbal compliment from Jones. Lewis, still in a clench with Hernandez on the far side of the ring, looked over his shoulder at Jones and smiled.

“It’s an honor to even be in (Jones’) presence. I grew up watching him. I’m only 22, but I always saw his videos and I never thought I’d be fighting one of his fighters. Let alone be in the ring with him. It’s a dream come true. It was a tough fight for me. (Hernandez) was strong. He’s trained well,” Lewis said. “That was the push I need. My last fight, I got dropped in the first and I just wanted to show everybody it was a fluke. Things happen like that sometimes. We came back and fought our hardest.”