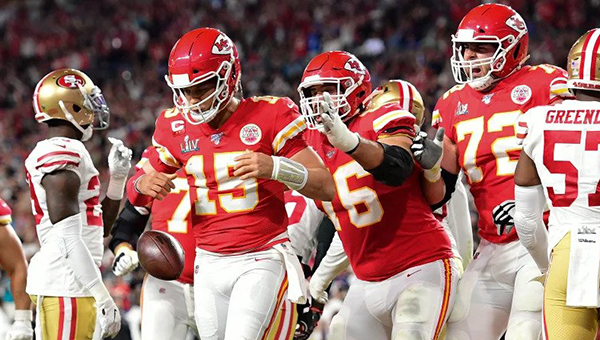 Kansas City Chiefs quarterback Patrick Mahomes (15) celebrates with offensive lineman Laurent Duvernay-Tardif after scoring a touchdown in Super Bowl LIV Sunday against San Francisco. Mahomes threw two touchdown passes, ran for a third score, and was the game’s MVP after leading the Chiefs to a 31-20 victory. (Courtesy of The Kansas City Chiefs)

MIAMI GARDENS, Fla. (AP) — Uncomfortable and under duress for much of the game, Patrick Mahomes suddenly recaptured his mojo and lifted Andy Reid and the Chiefs to a Super Bowl victory, the team’s first NFL championship in a half-century.

All it took was falling behind by double digits in the postseason again. Then Mahomes, selected MVP, hit two long passes on touchdown drives for a 31-20 victory Sunday over the San Francisco 49ers.

The Chiefs trailed 20-10 midway through the fourth quarter, but scored 21 unanswered points in the last 6:13 to win.

“We never lost faith,” Mahomes said. “That’s the biggest thing. Everybody on this team, no one had their head down. We believed in each other. That’s what we preached all year long.”

The vaunted 49ers defense wilted late, particularly on passes of 44 yards to Tyreek Hill and 38 to Sammy Watkins. The touchdowns came on short throws to Travis Kelce to cut the deficit to three and to Damien Williams for the lead. The first NFL title in Chiefs coach Reid’s two-decade career was clinched by Williams’ 38-yard TD run, sending red-clad Chiefs fan into chants of “Andy!” Andy!”

Reid, 61, won a Super Bowl ring with the 1996 Packers while in charge of tight ends. He’s been seeking one as a head coach since being hired by Philadelphia in 1999. The Eagles lost in their only trip to the big game after the 2004 season.

“This is what it’s all about,” Reid said. “What a great team, great coaches. Appreciate every bit of it.

Kansas City’s fans in the crowd of 62,417 at Hard Rock Stadium got little opportunity to chant and do the tomahawk chop as KC fell behind 20-10 with 17 1/2 minutes remaining. San Francisco scored 17 straight points of its own, capped by Raheem Mostert’s 1-yard TD run with 2:35 left in the third quarter, after falling behind in the first half.

Mahomes even threw his second interception of the night after that. But then came the kind of Mahomes magic that makes him special.

He found Hill, whose bobble led to the second San Francisco pick, for 44 yards on a third-and-15 — the first long pass completed by Kansas City. A 20-yard pass interference call on Tarvarius Moore, a former Southern Miss star who had that earlier pick, put the ball at the 1 and Kelce was wide open for the score.

The Chiefs defense, confounded by the Niners’ misdirection much of the game, got stingy and forced a three-and-out. Mahomes soon hit Watkins down the right sideline behind Richard Sherman for a 38-yard gain, leading to Williams’ first score.

Williams finished with 104 rushing yards on 17 carries, and added 29 yards on four receptions. It was the first 100-yard rushing game by any player in a Super Bowl since Seattle’s Marshawn Lynch had 102 in Super Bowl XLIX in 2015.

San Francisco (15-4) had nothing left in the fourth quarter, and its coach, Kyle Shanahan saw yet another late-game meltdown by his team. Three years ago, as offensive coordinator in Atlanta, he was part of the Falcons’ collapse and loss in overtime to New England.

Kansas City, an original AFL franchise, won the final Super Bowl before the full merger, beating Minnesota in 1970. Chiefs owner Lamar Hunt even coined the phrase Super Bowl. The Chiefs had been one of two teams, along with the New York Jets, to have won a Super Bowl during its early years but never an NFL championship.

Now the Hunt family can add a Vince Lombardi Trophy to the Lamar Hunt Trophy earned with the franchise’s first AFC crown.