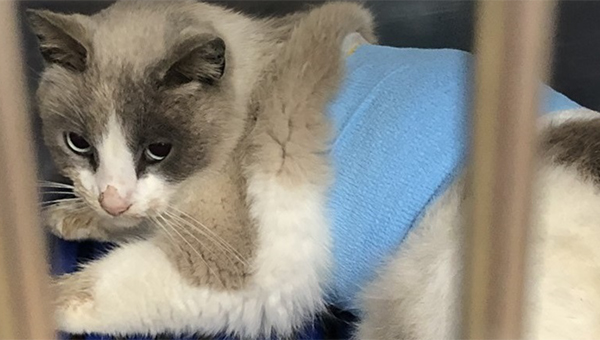 “This is a story about a cat. A sweet loving, fat, fluffy white cat with gorgeous blue eyes that came to be known as the Super Junior Cat — our store cat — our precious Kitty Girl.”

Claudia Beasley, who is an employee at the Super Junior on Oak Ridge Road, wrote these words to commemorate a cat that had not only become a mainstay around the convenience store but had also befriended many of its customers.

“As time passed, she began to allow our wonderful customers to even pet her,” Beasley said.

Unfortunately, this came to an end about two weeks ago when someone shot and killed the cat.

Beasley said she, along with the other store employees, did not know exactly when the “heartless sorry scum-sucking vermin decided that they needed to end her life” but in an attempt to find out, a $400 reward is being offered.

Kitty Girl was born on Boy Scout Road. She, along with her siblings, had been abandoned by their owners Beasley said. Olive Merrit, a neighbor, had continued to feed the kittens.

“Our Kitty Girl must have decided to go walkabout one day,” Beasley said and found herself at the Oak Ridge Super Junior.

Once noticed by Sam Worthy, a Super Junior employee, the adventurous kitten was fed and a water bowl was set out.

Beasley said it took nearly a month before the cat would allow Worthy to pet her, but once the feline gave in, she became friendly with the rest of the employees and eventually customers.

“Our customers began to love her just like those of us at Super Junior did,” Beasley said.

Kitty Girl was known by many names.

Initially, no one at Super Junior knew her first caregiver had named her Pearl, therefore Worthy called her Baby Girl. Super Junior employee Sandy Irwin called her Mama Kitty and Kitty Girl was Beasley’s pet name for the cat.

“Our customers just called her Kitty,” she said.

There had been many attempts to provide shelter for Kitty Girl, Beasley said, but she preferred to sun herself on the sidewalk and sleep under a building adjacent to the Super Junior parking lot.

Beasley said Kitty Girl was shot sometime between Jan. 24 and Jan. 26, and although her wounds were extensive somehow she made her way back to the Super Junior the following Tuesday.

Karen Kirk, a customer who was at the convenience store, found the injured cat.

Beasley said the doctors did all they could to save the beloved animal, but she did not survive the surgery.

Beasley said the doctors were amazed she had even survived the bullet wound as long as she did since there had been damage to Kitty Girl’s liver, kidneys, lungs and diaphragm.

“But I know how she lived that long. She was a survivor. She had a big heart, and she was our sweet cat,” Beasley said.

Kitty Girl touched the lives of many, Beasley said, and because of her impact, donations poured in to cover the cost of her vet bill and surgery. Those contributions have also helped fund the reward.

If anyone has information that could lead to the arrest of the person who shot Kitty Girl, they are asked to call the Warren County Sheriff’s office, 601-636-1761.

“I loved this sweet cat. I loved her as if she were my own,” Beasley said. “Those that saw her daily loved her too. She didn’t deserve this cruel and painful fate. She was just a sweet beautiful cat, and she will be missed.”