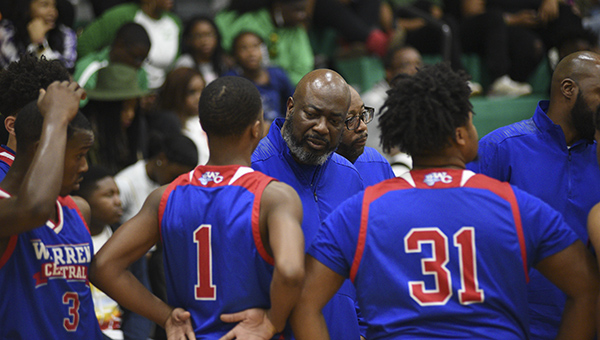 Warren Central’s basketball teams have two games left in the regular season and one mission for them — find some answers.

The Lady Vikes had lost eight consecutive games heading into Tuesday’s contest with Northwest Rankin. The boys’ team only had a three-game losing streak, but had dropped seven of eight.

With the Region 4-6A tournament looming next week, there’s not a lot of time left to pull out of their respective skids before it’s too late.

“Just being confident, is what we’ve got to be,” Lady Vikes coach Darein Hilliard said.

The Lady Vikes (8-12, 0-5 Region 4-6A) are locked in as the No. 4 seed in the region tournament and will play No. 1 seed Clinton in the first round. Before then, they take on Northwest Rankin and Madison Central (17-7, 1-3) in the last two regular-season games.

They’ll also likely do it without leading scorer Aniya Sanders. The senior and Copiah-Lincoln Community College signee sprained her ankle in a loss to Madison Central last week and did not play in a 68-36 loss to Vicksburg on Saturday.

Without Sanders, Hilliard said the Lady Vikes will have to rely on younger players to step up. Freshman point guard Tamiya Sims scored 12 points and sophomore center Zy’Kerri Segrest had 10 in the loss to Vicksburg, which was more competitive than the final score indicated. The Lady Vikes trailed by three points heading into the fourth quarter, then were outscored 33-4 the rest of the way as their thin lineup ran out of gas.

Hilliard was pleased with that effort, and is hopeful it can lead to a better one next week. Other than a three-point loss to Murrah on Jan. 21, they’ve lost their region games by an average of 29 points.

“We’re just going to build on what we’ve done today,” Hilliard said after the Vicksburg game. “If you can put two freshmen and a sophomore out there and they hang around … we’ve got to get a little more help from Zy (Segrest) and the bench.”

For Warren Central’s boys’ team, this week’s games are more about finding the right gear next week in the region tournament.

Other than Clinton (20-6), none of the teams in Region 4-6A have more than 13 wins. That, WC coach Bruce Robinson said, offered hope that his team can put behind what has been a dismal 2020 so far and start fresh against similar competition.

The Vikings (11-12, 1-4) are currently in fourth place in Region 4-6A, but can move up to third with a win over Madison Central on Friday coupled with a Madison loss to Murrah on Tuesday.

“It doesn’t bother me what spot we come in, because there’s just so much parity,” Robinson said. “The thing I want to do is win our first game, in the first round. That’s the thing we have to figure out. We have to start playing basketball.”

That encompasses a lot of things, Robinson added. Two of the three losses during the Vikings’ current losing streak were by 25 points or more. Some of that was due to the absence of senior forward Jabari Bowman, who was ejected from one game and suspended from two more for his role in an altercation in an 82-57 loss to Clinton last week.

Bowman averages 17 points and 8 rebounds per game, is a defensive presence inside and the key player in the team’s offensive scheme. He’ll be back this week, but Robinson said the Vikings need a lot more than his return to get on track.

“Rebounding. Maximum effort. And just a little bit more focus,” Robinson said. “One thing about our district is, no matter what spot you come in, anybody can win it. Of course we’re going to play next week and try to fine tune some things. But I think we’re going to try to shore up our rebounding and our execution on offense because we don’t have a good understanding of what we’re trying to do. We’ll be ready by district time.”