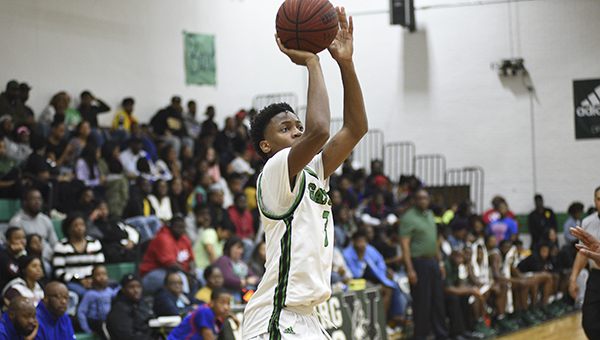 For Vicksburg High’s basketball team, this week is the calm before the storm.

Both the Gators and Missy Gators are locked in as the No. 2 seeds for their respective Region 4-5A tournaments next week — they’ll both play Ridgeland in the first round — and have designs on deep runs in the MHSAA Class 5A playoffs.

Before that, however, there is a little bit of business to clean up. Vicksburg has two games this week against Clinton and Brookhaven, with the goal of both cleaning up some holes in their game and maintaining momentum heading into the postseason.

The Gators (17-7) have been playing some of their best basketball down the stretch. Saturday’s 82-49 blowout victory over Warren Central last weekend was their sixth in a row. They swept Region 4-5A opponents Ridgeland and Provine, and five of the six wins in their current streak came either on the road or on neutral courts.

Overall, the Gators are 11-6 away from their own gym, which bodes well for a potential postseason run, Carter said. The first two rounds of the Class 5A tournament will be played at campus sites, and the rest at neutral sites.

“We have definitely gotten better game by game,” Carter said. “We went to Jackson on a Monday and played Murrah, and then turned around on Tuesday and played Provine, and it’s tough to beat those Jackson schools. You know if you can play well in that environment, then you can play well in any environment. But the build is what we’ve been doing game by game to get better, and we’ve had some guys step up.”

On the girls’ side, the Missy Gators (16-8) have played well overall, but struggled to put together consistency from game to game. Before blowing out Warren Central 68-36 last Saturday, they played four games in a row decided by four points or less. Eleven of their 24 games have been decided by that same close margin.

Stewart said his team’s potential is unlimited, provided they can bring the kind of consistent effort that puts them on the right side of those thin margins.

“I honestly believe, in my heart, that this group of girls — when they’re clicking on all cylinders and we’re playing well — we are a state championship caliber team. It’s just getting everybody to play on one accord at the same time is the biggest issue,” Stewart said. “When we’ve lost, we’ve only lost by three or four and we’ve lost to the top teams in the state and some average teams. You just never know how we’re going to play when we come out of the locker room.”

The addition of five ninth-graders, fresh off winning the Little Six Conference tournament, should give a lift to the Missy Gators. Coach Troy Stewart said he’s trying to blend in the younger players with the veterans who have had plenty of success to this point, but has also substituted them as a full unit at times to give the starters a breather.

“We’ve got two extremely tough opponents this week, and I want to fare well against those two, see if we’re playing as well as we can and gel before the district tournament. The two games this week are both a challenge,” Stewart said.

Facing Clinton (18-4) and Brookhaven (22-3), Stewart added, will push the Missy Gators to stay on top of their game heading into the playoffs. In fact, it’s the reason he put them on the schedule.

“To see where we were and where we line up with the state,” Stewart said. “I knew both of those teams would be high in the playoffs and rankings. We wanted to know exactly where we fall in.”