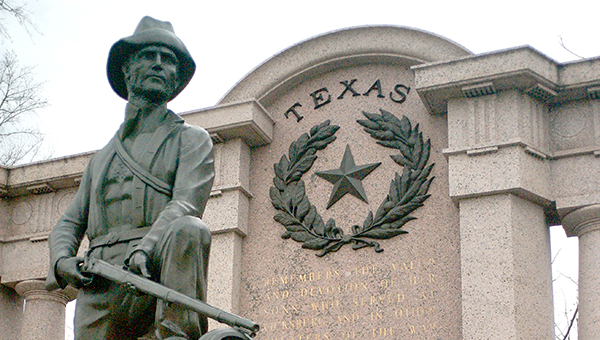 The Texas Monument in the Vicksburg National Military Park.

Work has begun on a project to resolve an erosion problem affecting the Railroad Redoubt and the Texas State Memorial, according to information from the Vicksburg National Military Park.

The project, which is being done by Keller-North America, began Monday and is expected to take about a year to complete. It involves building a retaining wall to correct and stabilize an eroding bluff below the Railroad Redoubt earthwork fortification and Texas State Memorial.

During the project, according to park officials, access to the Railroad Redoubt, the Texas Memorial and the parking area at Tour Stop 13 may be restricted or closed to the public.

Park Superintendent Bill Justice said the erosion problem has been going on for several years.

“We had been keeping an eye on it,” he said. “The issue has been that for a number of reasons there has been a slow erosion along the railroad redoubt and along the Texas Memorial.

He said another erosion issue has forced the park to close Grant Avenue and Grant and Sherman Circles to the public for safety reasons.

“We have some pretty severe erosion issues over there,” he said. “We have actually closed that section off to pedestrians as well as vehicles.”

Justice did not have a timeline on repairs to that area.

The Railroad Redoubt is an earthen mound constructed during the Civil War to protect the railroad.

In 1863, the Railroad Redoubt and the Confederate soldiers who defended it withstood multiple assaults by Union forces, forcing the decision by Maj. Gen. Ulysses S. Grant to lay siege to Vicksburg.