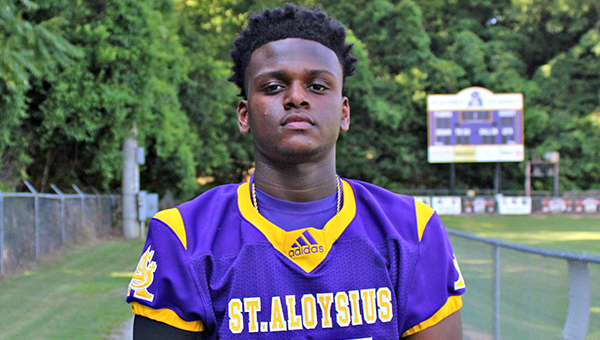 St. Aloysius basketball player Markeece Wilson scored a team-high 11 points in a 52-44 loss to Park Place on Tuesday in the first round of the MAIS District 3-4A tournament. The loss ended St. Al’s season.

The St. Aloysius Flashes put together a spirited comeback Tuesday night, but it wasn’t enough to save the season.

The Flashes cut a 21-point halftime deficit to seven before running out of gas, and lost 52-44 to Park Place Christian Academy in the opening round of the MAIS District 3-4A tournament.

The loss ended St. Al’s season. Park Place advanced to the semifinals against tournament host and top-seeded Simpson Academy, and earned a berth in the MAIS Class 4A South State tournament.

St. Al trailed 38-17 at halftime, but held Park Place to 14 points in the second half to get back in it. The Flashes, though, couldn’t quite get over the hump and complete the comeback.

The St. Aloysius Lady Flashes also had their season end in the first round of the district tournament, with a 40-19 loss to Hillcrest Christian.

Hillcrest will face No. 1 seed Hartfield Academy in the semifinals on Friday, and also advanced to the South State tournament.

Benton built a 15-point lead by halftime and continued to pull away in the second half. Both of its wins this season have been against Porter’s Chapel (4-18), which had its season end.

Benton advanced to face top-seeded Greenville Christian in the semifinals, and earned a spot in the Class 2A South State tournament.

(G) Benton Academy 50, Porter’s Chapel 39
Porter’s Chapel Academy trimmed a double-digit halftime deficit to four by the end of the third quarter, but only scored five points in the fourth and had its season end in the opening round of the MAIS District 4-2A girls’ basketball tournament with a loss to Benton Academy.

Jewell Vandevere and Gracey Manor led Benton with 16 points apiece. Benton advanced to face top-seeded Manchester Academy in the semifinals, and earned a spot in the Class 2A South State tournament.

Warren Central outscored Northwest Rankin 16-7 in the third quarter to take a 49-47 lead into the final period, but was in turn outscored 17-8 in the fourth quarter.

Warren Central (8-13) lost its ninth consecutive game. It will finish the regular season Friday at home against Madison Centralat 6 p.m., and then play Clinton in the first round of the MHSAA Region 4-6A tournament next week in Jackson.

(G) Clinton 75, Vicksburg 54
Jakayla Johnson scored 24 of her game-high 38 points in the first half, and Clinton blew the game open with a 19-0 run in the second quarter on its way to a blowout win over Vicksburg (16-9).

Yakia Burns led Vicksburg with 15 points, while Karmen Davenport and Destini Sims scored seven apiece. The Missy Gators will finish the regular season Friday at 6 p.m., at home against Brookhaven.

Clinton also beat Vicksburg in the boys’ game, 61-60, to snap the Gators’ six-game winning streak. Vicksburg (17-8) is the No. 2 seed in the MHSAA Region 4-5A boys’ tournament next week in Jackson.